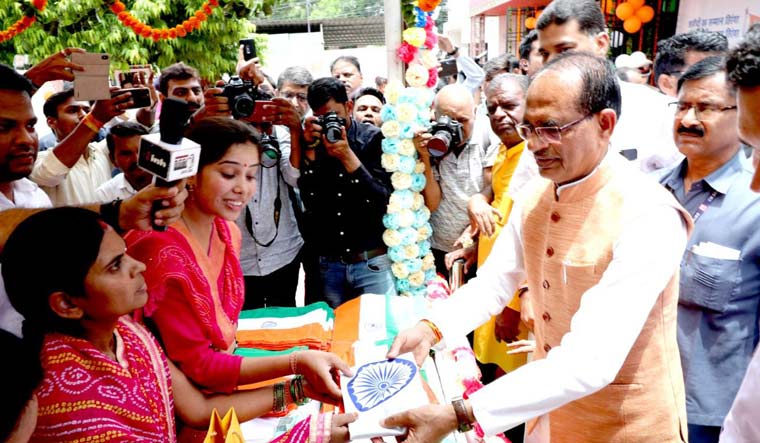 Madhya Pradesh Chief Minister Shivraj Singh Chouhan, on Thursday, called upon people of the state to purchase the national tricolour with their hard-earned money and hoist it at homes under the 'Har Ghar Tiranga Abhiyan'.

The chief minister’s call came at a programme organised in Bhopal after he purchased a national flag from a women’s self-help group outlet. Chouhan said the national flag is the pride and honour of the country. Life may be lost, but the pride of the tricolour should not be lost, he added.

He also called upon citizens to upload their selfies with the national flag as part of the ‘Har Ghar Tiranga’ campaign. Selfies with flags could be uploaded on the government of India website harghartiranga.com.

The chief minister’s statement about purchasing flags with hard-earned money is being seen in context of the controversy over the decision of the MP BJP to set up stalls of national flags at their offices across the state. Earlier, the BJP called them ‘flag sale centres’, but after controversy, the party said they were facilitation centres from where standardised flags were being made available at production cost.

BJP state president Vishnu Dutt Sharma had opened a centre at BJP headquarters on August 2 and purchased a flag. However, the Congress attacked the ruling party, saying despite being the richest political party in the world, it was resorting to selling the national flag.

Bhopal central MLA Arif Masood had slammed the BJP's initiative and announced that he would be distributing free national flags along with photographs of national leaders to Bhopal citizens. The chief minister’s ‘purchase with hard-earned money’ call is being looked upon as a jibe against the Congress MLA.

The Congress, however, attacked the CM on Thursday. Party spokesperson Narendra Saluja said in a tweet that by purchasing the national flag from women SHG and avoiding the BJP centres, Chouhan was ensuring that the BJP flag sale centres registered losses. In another tweet Saluja asked whether the chief minister did not have faith in (BJP chief) Vishnu Dutt Sharma’s ‘shop’ or the quality of the product there.

The chief minister said that in keeping with the call of the Prime Minister Narendra Modi as part of the 'Amrit Mahotsav' (75th anniversary celebrations) of the country's independence, it has been decided that in Madhya Pradesh, the tricolour will be hoisted in every house from August 13 to 15.

“Women of Self-Help Groups are engaged day and night in the supply of the national flags across the state. I could have gotten a flag delivered home, but I decided to come here myself to purchase,” the CM said, urging citizens to do the same.

Along with the SHGs, who are producing flags in bulk, services of micro, small and medium scale entrepreneurs, tailors, printers are also being taken for the supply of flags. The target is to make available 1.51 crore flags in the state, the CM said.