'I don't support corruption': Mamata on arrest of Partha Chatterjee

Truth must come out within a time frame, says CM 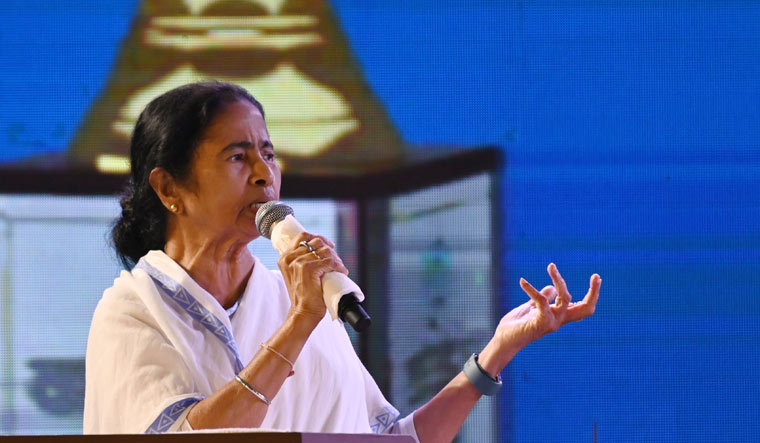 West Bengal Chief Minister Mamata Banerjee on Monday broke her silence over the arrest of her cabinet colleague Partha Chatterjee and said she doesn't support corruption or any wrong doing. She, however, maintained that the truth must come out within a time frame in the alleged school jobs scam.

“If anyone is found guilty, he or she must be punished, but I condemn malicious campaign against me,” Banerjee said, addressing an award function in Kolkata.

The chief minister slammed the opposition for a "malicious campaign" launched against her. “If anyone is proven guilty, then he or she must be punished. The party, too, will take action. But, I condemn the malicious campaign against me," she said.

Banerjee asserted that the Trinamool Congress didn't have any relation with Arpita Mukherjee from whose house the Enforcement Directorate allegedly recovered Rs 22 crore in cash. "The party has no relation with that lady, neither do I know her. I attend several programmes, if someone gets clicked with me, is it my fault?" Banerjee asked.

Reports claimed that Arpita is a close associate of Chatterjee.

Chatterjee, the West Bengal Industry and Commerce Minister, was arrested by the ED on Saturday in connection with its investigation into the irregularities in the recruitment drives by the School Service Commission (SSC), which allegedly happened when he was the state's education minister.

Meanwhile, doctors at the AIIMS in Bhubaneshwar on Monday said though Chatterjee suffers from chronic diseases but does not need immediate hospitalization.

The Calcutta High Court had on July 24 directed the ED to take the 69-year-old TMC leader  to the health facility in the neighbouring state by an air ambulance as he complained of health issues.