'He was a rooster only in name. He had human sanskar' 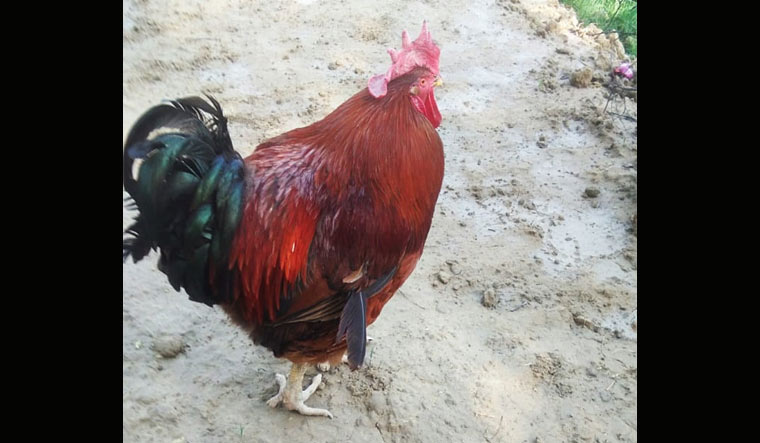 A family in Pratapgarh performed funerary rituals for its beloved rooster in the same manner as those done for humans.

Shanikram Saroj, his wife Asha Devi and their six children’s rooster, Laali, passed away on July 9, while trying to fight off a dog attacking the family goat’s one-month-old kid.

Laali had come to the family as a baby. Asha Devi had bought him from a wandering vendor.

“He was a rooster only in name. He had human sanskar (values)”, said Saroj, 52, who has a medical practice in the village of Behdaul Kalan (Raniganj tehsil of Pratapgarh district).

Laali was like a watchdog, sitting outside the family’s home, his eyes darting in all directions to keep away any unwanted visitors.

On July 8, none of the family members was at home. Saroj was in Allahabad to deposit the college fees for his four children, Asha Devi was at the family’s farm and the youngest daughter was at the local school.

According to the account that Saroj pieced together from neighbours, a stray dog attacked the kid and Laali sprang to his defence at once. Another dog joined in and pounced on Laali. Both the dogs then dragged Lalli away, their teeth dug into his body, for almost a kilometre before neighbours could rescue him. But the cuts in his body were deep and his feathers had been plucked off. The next morning Laali passed away.

“For two days no food was cooked at our home. The girls would not stop crying. And then my 18-year-old daughter who used to tie a rakhi on Laali’s hind leg said to me that he deserved a proper send off for he was a family member. ‘Do it however, but, it must be done’, said my daughter,” Saroj said.

Laali was buried in front of the family’s home and prayer performed for him. Laali’s photo, on a mobile phone, was placed on a plastic chair covered with a towel, while the pooja was done.

On July 19, the Saroj family hosted a tehravi feast for family and friends.

“Some people in my village said to me, ‘What are you doing doctor?’ but most others were supportive. On the 19th, there were more people than I could ever have imagined”, Saroj said. Some 500 people showed up for Laali.

In Hinduism, the tehravi is an important ritual, performed on the 13th day after the death of an individual. It is believed that for 13 days the soul of a departed person lingers on amidst loved ones. It is only on the 13th day when a feast is hosted for family and friends, that the soul can break free of its attachment to this world and move on to the next.

The feast in Laali’s memory was lavish. There were pooris, kachoris, rice, lentils, pickle, potato and tomato curry, spinach, pumpkin and boondi (a sweet dish made from fried chickpea flour) among other delicacies.

“The halwai (professional cooks) who did all the work has not taken any money from me as yet. They said it was their good fortune that they could be part of a ceremony that was almost unbelievable”, said Saroj.

While the family is slowly coming to terms with Laali’s loss, Saroj said that he had decided to never have a pet again. “It is just too painful to lose one. My Laali’s qurbani (sacrifice) will always be in our hearts”, he said.