AIADMK leadership row: Palaniswami and Panneerselvam to fight it out in courts 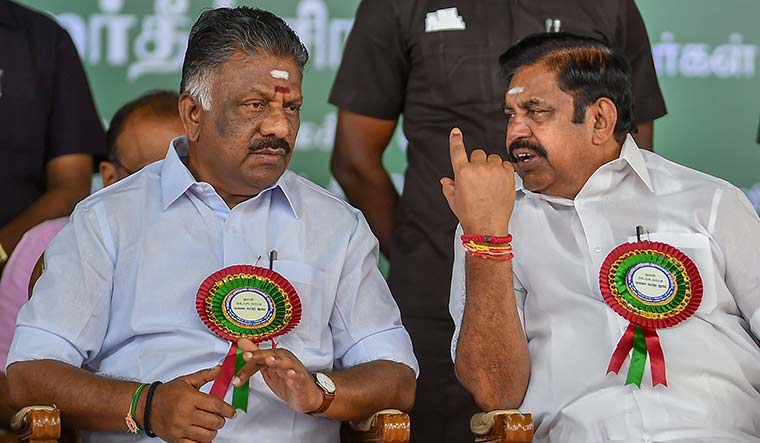 The battle for power in AIADMK in Tamil Nadu continues to be in court with the Supreme Court agreeing to list for Wednesday a petition filed by Edappadi K. Palaniswami challenging the Madras High Court order, restraining the AIADMK general council from amending the party bylaws during its meeting on June 23.

A vacation bench headed by Justice Indira Banerjee posted the matter for Wednesday, after hearing the plea. Senior advocate C.S. Vaidyanathan, appearing for Palaniswami, requested for urgent hearing, saying the contempt petition filed by O. Panneerselvam would be coming up for hearing on Monday. He informed the bench that the AIADMK general council was restrained from passing resolutions through an extraordinary sitting of the HC on June 23.

Contending that the division bench of Madras High Court, through its 4am order on June 23, had erroneously interfered with the democratic process of the AIADMK and the general council meeting, Palaniswami through his petition, said the order prevented the party from deciding on its internal affairs. Seeking an interim stay on the HC order, Palaniswami, has been insisting for abolition of the dual leadership.

Meanwhile, the contempt petition filed by Panneerselvam came up for hearing before the division bench headed by Justice Doraiswamy. Counsel for Palaniswami questioned the maintainability of the plea, while Panneerselvam’s counsel Aravind Pandian argued that the election of Tamil Magan Hussain as the presidium chairman was violative of the order of the division bench and invites contempt proceedings. Pandian also filed a plea to stay the proposed general council meeting on July 11.

As Palaniswami has already taken control of the party, Panneerselvam has been left with no other option than to seek legal remedy.