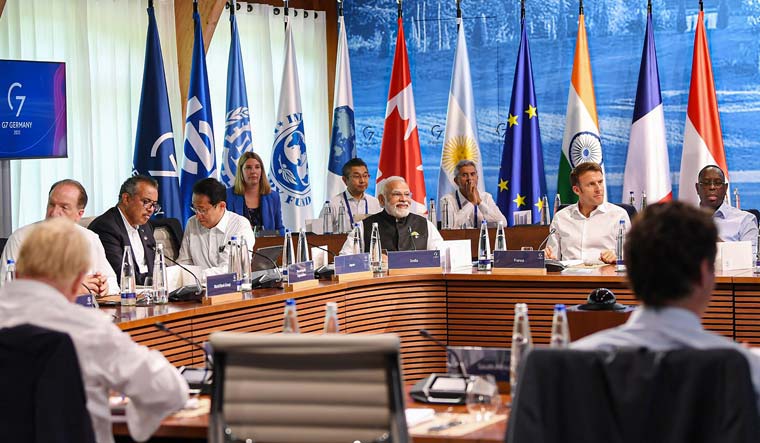 The Indian delegation at the G7 summit as a special invitee of the German Chancellor Olaf Scholz has been handing out special gifts to 11 world leaders who are at the summit being held in the Bavarian Alps.

A majority of these gifts are part of Uttar Pradesh’s 'One District One Product' scheme which seeks to strengthen the traditional product of a district through training and sales avenues. Unusual products like ghunghroos from Etah have made a mark across the world under the scheme, while the already vast reach of chikankari embroidery has grown further.

Japan Prime Minister Fumio Kishida was gifted black pottery products which can be made only from a kind of soil found in Nizamabad area of Azamgarh.

Boris Johnson, prime minister of the UK, received a hand painted tea set from Bulandshashr. The ceramic Khruja pottery dates back to the reign of King Feroz Shah Tuqhlaq.

French President Emmanuel Macron received bottles of Kannuaj’s famed ittr-oil based perfume, wrapped in gift boxes covered in the aari zardozi embroidery that the state’s capital Lucknow is known for.

A especially crafted table with marble inlay work from Agra was the gift for Italian Prime Minister Mario Draghi.

The Senegalese President Macky Sall has been gifted baskets woven from monjh (a kind of grass that grows in abundance in arid areas) from Prayagraj and cotton rugs from Sitapur.

This is not the first time gifts from UP being given to world leaders. In September 2021, US Vice President Kamala Harris and Australian Prime Minister Scott Morrison were given gifts crafted out of gulabi meenakari. These gifts were of special significance as they were from Modi’s Lok Sabha constituency. Harris received a chess set while Morrison received a ship.

In 2018, during a meeting, the PM gifted a hand-made rug to the then Japanase PM Shinzo Abe.

In 2016, when PM Modi was in Iran, he had presented the Supreme Leader of Iran with specially commissioned reproduction of a rare seventh-century manuscript the Quran attributed to Hazrat Ali, the fourth caliph. Written in Kufic script, this manuscript is a prized possession of the ministry of culture’s Rampur Raza Library of Uttar Pradesh.

During his visit to the UK in 2015, PM Modi carried presented tanchoi silk stoles, most significantly to the British Queen, again a speciality of his constituency Varanasi .

India in an invitee of Germany which holds the presidency of the group till 2022. Other special invitees include Argentina, Indonesia, Senegal and South Africa.