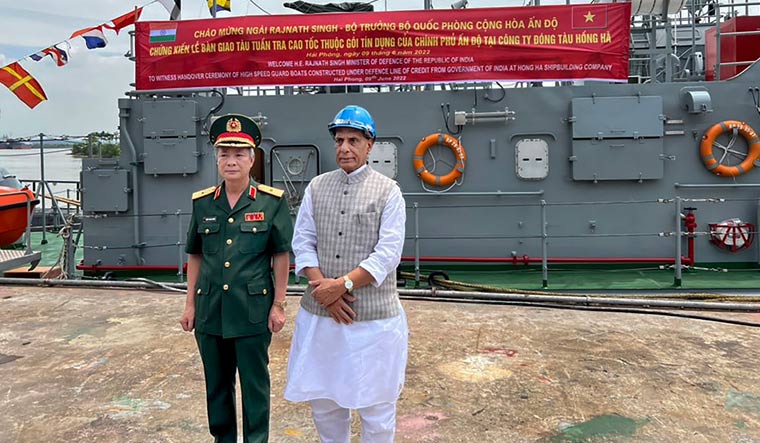 As India and Vietnam signed a 'Joint vision statement on India-Vietnam defence partnership towards 2030', India handed over to the country12 high-speed guard boats built under a $100 million line of credit granted to the Southeast Asian country.

Defence Minister Rajnath Singh is on a three-day visit to Vietnam to further cement ties and boost defence partnership between the two traditional allies. India and Vietnam face a similar challenge—growing assertiveness of China in the region. To counter China's salami slicing strategy on Himalayan border with India and South China Sea in Vietnam, both nations are focusing on boosting their ties.

“It gives me great pleasure to join this historic ceremony marking the successful completion of the project to build 12 high-speed guard boats under the $100 million defence line of credit by India," he said at the event.

The defence minister described the project as a glowing example of ‘Make in India, Make for the World’ as envisioned by Prime Minister Narendra Modi. He said the successful completion of the project, despite the challenges due to Covid-19, is an example of the commitment and professional excellence of the Indian defence manufacturing sector and Hong Ha shipyard. He exuded confidence that the project will be a precursor to many more cooperative defence projects between India and Vietnam in the future.

He stressed that the objective is to build a domestic industry in order to make India a defence manufacturing hub which not only caters to the domestic needs, but also fulfills international requirements.

On Friday, Singh began his day’s engagements by paying a visit to Air Force Officers Training School at Nha Trang. He handed over a gift of $1 million on behalf of government of India for the establishment of a language and IT laboratory in the school.

Addressing the officers at the school, he said he hoped that the laboratory would substantially contribute to sharpen the language and IT skills of air defence and air force personnel of Vietnam.