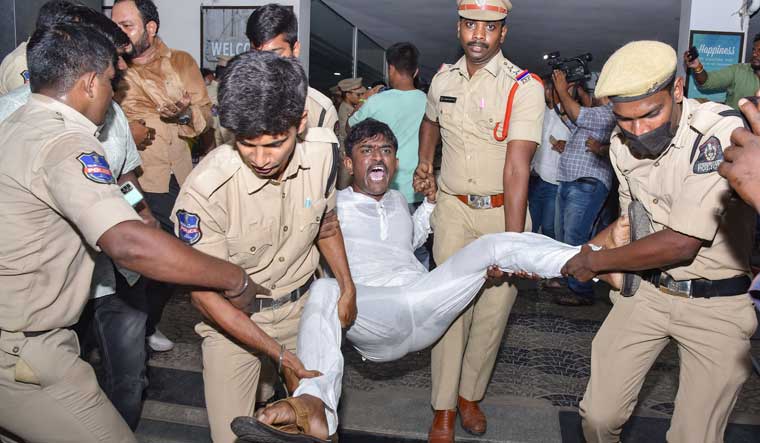 Police detain a party worker during a BJP agitation at the Jubilee Hills police station in Hyderabad, over the alleged gang-rape of a minor | PTI

Telangana Congress leader Feroz Khan alleged that Rs 50 lakh was offered to the family of the minor girl, who was allegedly gang-raped in Jubilee Hills, to remain silent on the issue. The family, however, turned down the offer and pursued the case legally, he said.

Khan, who has been tracking the case, said that one of the relatives of a boy involved in the crime was entrusted with the job of playing the mediator. “An elderly man related to the accused contacted the family of the victim. He offered to pay them Rs 50 lakh if the victim backtracked. The girl’s family refused to accept the money. It happened after a few days after the incident.”

Khan, who is the party’s Hyderabad parliamentary constituency in-charge, demanded that the Telangana government make an example out of the case by setting up a fast-track court. “I can challenge that if the KCR government does not give moral support and protection to the victim and does not set up a fast-track court, this case will land up in the dustbin. All the accused boys are filthy rich and politically influential. They can manage anyone and I won't be surprised if the case does not progress after 6 months. How can the middle class family of the victim stand upto them?”

Khan said that due to political pressure from the top, the police investigation moved at a snail’s pace in the initial days.

The alleged gang-rape of a minor in a posh locality rocked the Telangana capital. On May 28, she attended a daytime party at a pub after which she left the property with a group of boys.

They travelled in two cars for the next two hours during which the crime took place at an isolated place. The Hyderabad police have taken an adult and five minors into custody for the gang-rape and sexual assault of the girl inside the government car and a private-owned car they were travelling in. While one minor is the son of an MLA from the AIMIM party, another one is the son of a leader of TRS party who is holding an official post in the Telangana government. The other four, including three minors, are also from political families.

BJP leader and MLA Raghunandan Rao, who was instrumental in the Hyderabad police changing their earlier stand and booking the son of the MLA, sought to know what action would be taken against the senior police officials, including the DCP of West Zone Joel Davis, for the lapse.

The police had earlier given a clean chit to the MLA's son after which Rao had released an image and a video in which the boy was allegedly seen with the victim. Though the police maintain that they were not in possession of the video evidence, Rao accused police of inaction.

“The video was recorded by an occupant of the car and shared with others. When the police were approached, they spoke to all the accused and also examined all the photos and videos that were with them. Despite having access to the evidence, how did the senior officials conclude the investigation early and declare the MLA's son as innocent,” he said.

Despite a presser by the city police commissioner C.V. Anand last night, Rao said that there are several unanswered questions related to the Innova and Mercedes cars connected to the crime.