Police said a case has been registered under UAPA and IPC 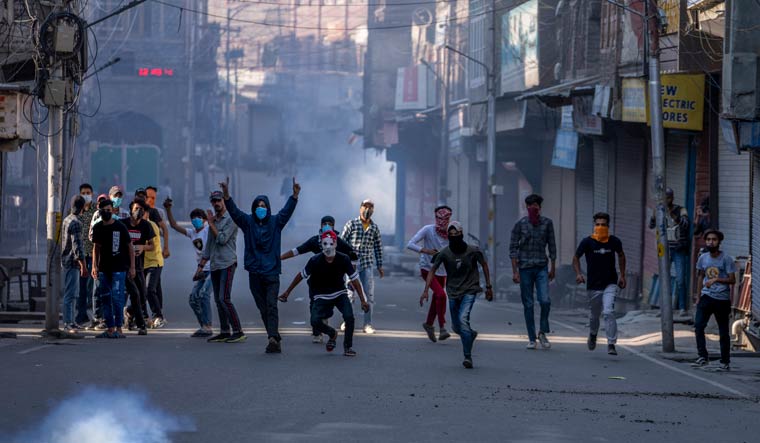 Young men clash with security forces during a protest against sentencing of Kashmiri separatist leader Yasin Malik, in Srinagar | AP

The Jammu and Kashmir Police have arrested ten persons for raising anti-national slogans and pelting stones during a protest outside separatist leader Yasin Malik's residence in Srinagar. Malik was sentenced to life imprisonment on Wednesday by a special NIA court after he was convicted in a terror funding case.

Parts of Srinagar witnessed protests ahead of Malik's sentence and, according to police, some people engaged in anti-national sloganeering and stone pelting outside his house in Maisuma area.

Police said more accused in the case are being identified and will be arrested soon. "A case has been registered under UAPA and IPC. The main instigators of this hooliganism will be booked under the Public Safety Act," they said.

The court awarded life imprisonment to Malik based on Section 121 (waging war against India) of the Indian Penal Code and Section 17 (raising funds for terror act) of the Unlawful Activities Prevention Act. A fine of Rs 10 lakh was also imposed on him.

Malik, who had earlier pleaded guilty to all the charges against him, including those under the UAPA, has now the option to appeal against the verdict in the high court.

According to court sources, the National Investigation Agency (NIA) had sought death penalty for Malik under Section 121 (Waging war against the government), saying he was responsible for the Kashmiri exodus.

Police had strengthened security across Jammu and Kashmir ahead of the verdict and mobile internet was suspended in Srinagar to prevent any untoward incidents.