Who is Yasin Malik, the separatist leader convicted in terror funding case?

Malik's conviction is a setback to separatist movement in Kashmir 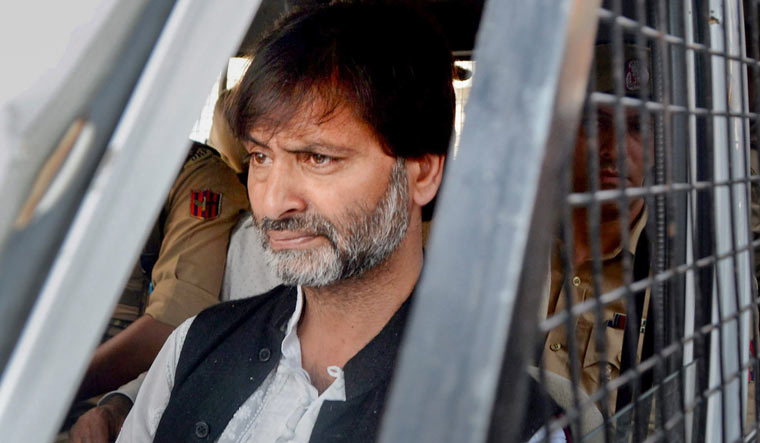 JKLF chairman Muhammad Yasin Malik being taken away by police personnel following his arrest, in Srinagar on Sept 7, 2017 | PTI

Yasin Malik, leader of the Jammu and Kashmir Liberation Front (JKLF), is a prominent separatist leader. His conviction is a setback to the separatist movement in Kashmir and for his outfit. The JKLF has a support base across the Line of Control (LoC) in Pakistan occupied Kashmir, Pakistan and PoK diaspora settled in Britain. He is considered a moderate.

Malik was convicted by a National Investigation Agency (NIA) court in Delhi. Reports said he has pleaded guilty in a case related to alleged terrorism and secessionist activities that disturbed the Kashmir Valley in 2017.

He was accused by the NIA of orchestrating the violent protests in 2016, during which 89 cases of stone-pelting were reported. He is also facing separate trials in the abduction of Rubaiya Sayyed, daughter of then J&K Home Minister Mufti Muhammad Sayyed in 1989, and for his alleged role in the killing of the Indian Air Force officials, including a squadron leader, in 1990 in Srinagar.  Malik, 56, was among the first few separatists to cross the Line of Control into Pakistan occupied Kashmir (PoK) for arms training in 1988 and join the JKLF.

A resident of Srinagar's Maisuma, popularly known as Kashmir's Gaza strip, he was a member of Tala Party in the 80s, which aspired for a free Kashmir.

In 2009, he married Mushaal Hussein Mullick, an alumnus of the London School of Economics (LSE). The couple has a 10-year-old daughter, Razia Sultana, who lives with her mother in Pakistan.

In 1987, when the Muslim Mutahida Mahaz (Muslim United Front or MUF), a coalition of parties with separatist leanings, challenged the National Conference in the elections, Malik had campaigned for the MUF candidate, Peer Muhammad Yousuf Shah. He later became Syed Salahuddin, chief commander of Hizbul Mujahideen.

The elections were allegedly rigged by the NC with the backing of the Congress, sowing the seeds for militancy in the Valley. Malik was one of the four commanders of the JKLF, the others being Hamid Ashfaaq, Javid and Yasin of the HAGY group that hogged limelight after the advent of the gun in Kashmir.

He was arrested in 1990 during a raid on a safe house and released on bail in 1994. After his release, he announced a ceasefire and said that the JKLF would pursue peaceful means for the Kashmir issue resolution.

Malik adopted the Gandhian way of non-violence to highlight the Kashmir issue and received support from civil society members from India, including late journalist and diplomat Kuldeep Nayar.

After he decided to renounce the gun, he was removed as chief commander of the JKLF by group's patron Amanullah Khan.  Malik retaliated by expelling Khan, leading to a split in the group and became the real JKLF due to wide support.

He was also a member of the powerful executive body of the Hurriyat Conference, the political face of the separatist movement in Kashmir formed by several parties in 1993.

In 2001, the Centre issued him a passport to travel to the US for medical treatment. After the Hurriyat split into two factions—moderates and hardliners—in 2003, he went his own way.

Malik was part of a group of separatist leaders who drove a bus to PoK across the LoC to meet the leadership of PoK and Pakistan for a peace deal on Kashmir between India and Pakistan in 2005. The deal was the idea of then Pakistan President General Parvez Musharraf. Better known as the four-point formula, the deal envisions self-rule on both sides of the LoC, free movement of people across the LoC, joint management of some areas like tourism and water resources of Kashmir by both India and Pakistan and demilitarisation. The plan failed after Musharraf lost power and a change of guard in New Delhi.

The JKLF leader has been opposing elections in Kashmir and calling for a boycott. In 1999 he was arrested under Public Safety Act (PSA) and released in 2002. His party launched a campaign known as Safar-i-Azadi (Journey of Freedom) in 2007 to garner support for the right of self-determination for the people in Jammu and Kashmir.

He has been very vocal that the entire Jammu and Kashmir on both sides of the LoC, including Gilgit and Baltistan, is one entity. Pakistan calls Gilgit and Baltistan as the northern areas and is planning to give it the provisional status of the province—the fifth province of Pakistan.

The trial of Malik had attracted international attention.

On May 17, UK Foreign Office minister Tariq Ahmad told the House of Lords that the British government is monitoring the trial of the Kashmiri separatist leader very closely. He, however, added that he was charged under Indian law and, therefore, part of an independent judicial process.

Pakistan also summoned India’s Charge d’Affaires in Islamabad to the Ministry of Foreign Affairs and handed over a demarche to him conveying Islamabad’s strong condemnation of the framing of “fabricated charges” against Malik. The quantum of the sentence against him is to be announced on May 25. His conviction signals seriousness of the BJP government to go hard against the separatists in Kashmir.

Malik is a popular figure in Kashmir, who political analysts believe has been a voice of reason and moderation given his strong secular credentials. The veteran separatist leader's conviction would deal a blow to the separatists in Kashmir and Pakistan as it comes after Jammu and Kashmir lost its limited autonomy and statehood on August 5, 2019.