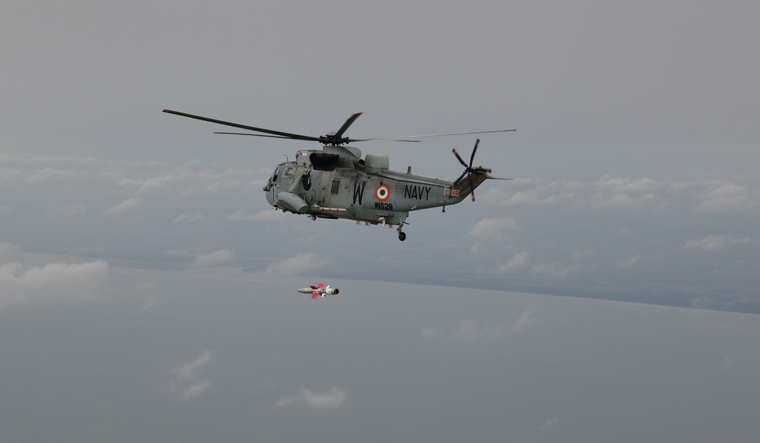 The Indian Navy on Wednesday announced it had conducted the maiden test-firing of the country's first indigenously developed anti-ship missile.

The Indian Navy said the 'Naval Anti-Ship Missile' was fired by a Sea King helicopter off the missile test range at Balasore. The Indian Navy noted the test was carried out in cooperation with the DRDO, which developed the weapon. It tweeted, “This firing is a significant step towards achieving self-reliance in niche missile technology and reaffirms the Indian Navy's commitment to indigenisation.”

The DRDO said the missile test was successful.

What we know about the new weapon?

References to a new, indigenous anti-ship missile first came in 2018 when then defence minister Nirmala Sitharaman shared a list of new DRDO projects that were in the technology demonstration phase. The list included a 'Naval Anti-ship Missile-short range'. The project has since been referred to by its acronym NASM-SR. The document shared by Sitharaman showed a fund allocation of Rs 434.06 crore for the project.

Further details of the new weapon emerged at DefExpo 2020, where the DRDO showed schematics of the NASM-SR. The missile tested on Wednesday appeared to be visually similar to the NASM-SR.

The data shared by the DRDO showed the proposed weapon had a weight of 380kg and a range of up to 55km and was meant for launch from helicopters. The DRDO claimed the weapon would travel at a speed of 0.8 Mach (slower than the speed of sound) and would have an imaging infra-red seeker, which would home in on the heat emissions of its targets.

The weapon would have a warhead of 100kg, capable of sinking patrol boats and damaging larger warships. The NASM-SR, on approach to its target, can cruise at just 5metres above sea level, making it difficult for enemy radars to detect and track and shoot down with surface-to-air missiles or guns. This low-level capability of anti-ship missiles is known as sea skimming.

There has been speculation the DRDO would develop newer variants of the NASM, with longer range, which could potentially make the weapon useful in attacking land targets.

Why the new weapon matters?

Moreover, the use of an IIR seeker means the NASM-SR is impervious to radar jamming by enemy warships and also less likely to be detected on approach as it is not using a radar to track its target.

While the supersonic BrahMos remains the Indian Navy's primary anti-ship missile, the Russian-origin weapon is hamstrung by its weight of over 2 tonnes. While India and Russia are working to develop a lighter version of the BrahMos for fighter jets, the missile would still be too heavy for practical use on a helicopter or even smaller ships.

In addition to helicopters, missiles such as the NASM-SR can be easily adapted for launch from land-based vehicles and small ships. It could act as a potent upgrade to the Indian Navy's fleet of offshore patrol vessels that do not have anti-ship missiles at present.

The Italian-designed Marte missile, a weapon in a similar weight category, has been adapted for use on helicopters, aircraft, ships and land-based systems.

What about 'small' warhead?

The lighter warhead of the NASM-SR is capable of doing significant damage. The recent sinking of the Russian warship Moskva in the Black Sea and the loss of British warships in the Falklands War of 1982 show that modern navy ships have enough flammable material on board (fuel, wiring, weapons, electronics etc.) that can exacerbate the damage done by even small anti-ship missiles.

With China furiously building up its navy and the Pakistan Navy also moving to replenish its surface fleet, a weapon like the NASM-SR would add a potent option for the Indian Navy.