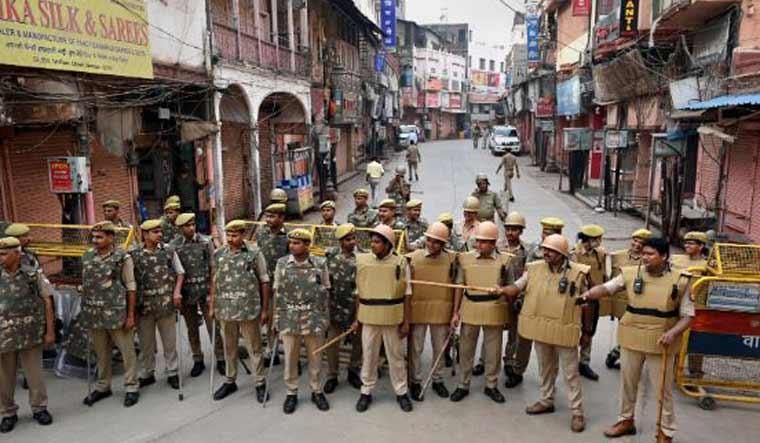 Police guarding the vicinity of the Gyanvapi mosque complex | PTI

A team that surveyed the Gyanvapi mosque complex in Varanasi was expected to submit its report to a civil court on Tuesday. The team completed its three-day-long survey of the complex on Monday.

On Tuesday. assistant court commissioner Ajay Pratap Singh, who was part of the survey team, claimed the report was not ready yet. He was quoted by ANI as saying “Only 50 per cent report [is] ready, not complete yet, which is why [we] won't be able to produce it before the court today. We will seek 3-4 days' time from court.”

However, another court-appointed special assistant commissioner, advocate Vishal Singh, said “The survey report is nearly complete and we are trying to submit the report to the court in time.”

On Monday, claims by a lawyer of the Hindu petitioners on the discovery of a Shivling during the survey had created a flutter. However, the Varanasi district administration has remained tight-lipped and noted the report on the survey was only meant to be submitted to the civil court and any disclosures prior to submission were speculations.

The mosque management committee had dismissed the claims of a Shivling being found. “We strictly followed the order by the court and fully cooperated in the survey. I am deeply pained that the people associated with petitioners are making claims which suit them and leaking details of proceedings of the survey,” S.M. Yasin, an official of the mosque management committee, was quoted as saying by Hindustan Times.