Karnataka: Will Congress leader Ramya cross over to BJP?

She has neither confirmed nor dismissed rumours of her switching sides 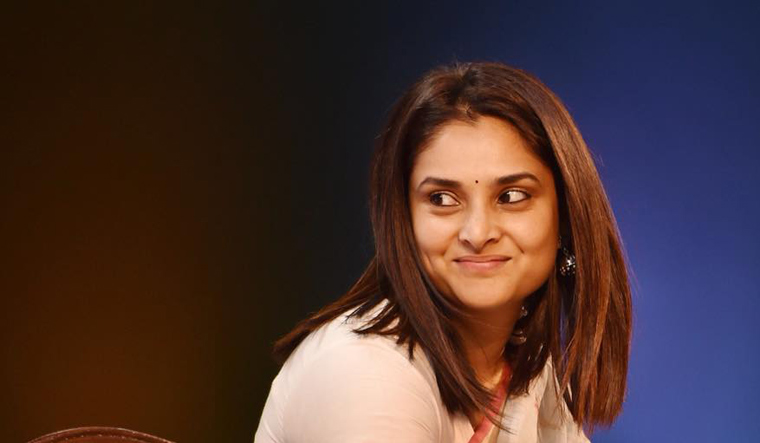 A show of camaraderie by senior Karnataka leaders at Udaipur during the just concluded ‘Chintan Shivir’ (brainstorming session) of the Congress did little to clear the confusion surrounding actor-turned-politician Divya Spandana aka Ramya’s sudden outburst against the state Congress leadership, on Twitter last week.

Karnataka Pradesh Congress Committee president D.K. Shivakumar and KPCC Campaign Committee chief M.B. Patil did not miss a single opportunity to be photographed together to send a strong message that all was well within the party after the duo had a run-in over an alleged secret meeting between BJP leader and Higher Education Minister Dr C.N. Ashwath Narayan and Patil, a former minister and a Lingayat leader from north Karnataka, who is considered close to former chief minister Siddaramaiah.

Shivakumar had alleged that Narayan had met Patil to seek protection over PSI recruitment scam—a charge that both Patil and the minister vehemently denied.

Former Mandya MP Ramya (39) who had withdrawn from social media and remained incommunicado ever since she was replaced as the AICC social media chief in September 2019, surprised everyone when she tweeted calling out KPCC chief over his remarks on a senior party colleague (M.B. Patil). Ramya asked if the party shouldn’t be fighting the elections as “one unit”.

“People across parties meet each other, go to functions, some even get married into families- I’m surprised @DKShivakumar would say this about @MBPatil who’s a staunch congressman. Shouldn’t the party be fighting elections as one unit?,” tweeted Ramya, reacting to Shivakumar’s allegation.

What followed was a Twitter spat that exposed the faultlines within the state Congress as Ramya took on Youth Congress president Mohammad Nalapad for questioning the “timing” of her tweet and her “integrity”. She reminded him that he was out on bail in an assault case.

With more and more leaders jumping into the controversy by taking sides, the state leadership tried hard downplay the incident at Udaipur. However, AICC general secretary and Karnataka inc-harge Randeep Singh Surjewala evading the reporters was a giveaway.

Ramya accused the KPCC chief of unleashing the troll army against her, while urging AICC general secretary K.C. Venugopal to clear the air over allegations of her having duped the party of Rs 8 crore during her stint as the social media chief. Ramya said it was an attempt to destroy her credibility and added that she regretted staying silent for so long.

In her reply to trolls reminding her that Shivakumar had been her mentor, Ramya said, “If there’s anyone who gave me opportunities and stood by me it’s @RahulGandhi. Anyone else claiming to have ‘given’ me opportunities is an opportunist. These opportunists have only backstabbed & tried to suppress me. Everything you see on tv is a farce to conceal their devious mind.”

Even though the trigger for the latest spat is still unclear, speculations are rife over Ramya making a comeback into electoral politics. While the Congress insiders claim that Ramya was hoping to fight the 2023 assembly elections from Mandya district, which has seven assembly seats, the BJP could be wooing her to take on the DK brothers.

As the JD(S) holds six seats and BJP one in Mandya district, the Congress is desperate to wrest the seats in the upcoming polls. Some local leaders feel Ramya, a Vokkaliga and a hugely popular celebrity who is also tech savvy, can be an ideal candidate as she had won the Mandya Lok Sabha seat with a huge margin of 67,611 votes in the 2013 bypolls. Her subsequent defeat in the general elections eight months later (by JD(S) candidate C.S Puttaraju) was attributed to her fallout with many prominent leaders in the party. While Shivakumar stayed away from campaigning for Ramya, veteran actor and former minister Ambareesh (also former Mandya MP) could not campaign owing to ill health. Yet, Ramya had lost by only 5,000 votes. She rented a house in Mandya promising to work for the people of Mandya despite her defeat. In May 2017, she was appointed Congress social media in-charge to take on the saffron party’s IT cell. She quickly turned around the party’s virtual campaign and also Rahul Gandhi’s image on social media.

In 2018, she hoped to contest from KR Nagar (Mysore district), which falls in the Mandya Lok Sabha constituency. While the constituency is dominated by Vokkaligas, followed by Kurubas and Dalits, the Congress (Siddaramaiah) chose to field a Kuruba candidate D. Ravishankar, a ZP member and son of the defeated candidate. Ramya vacated the rented home in December 2018, after she was trolled for skipping the assembly elections and for giving a miss to her political mentor and matinee idol Ambareesh’s funeral. Ramya took to Twitter to inform her supporters and critics that she had skipped the funeral as she had had a "surgery to remove a tumor in her leg".

Her online tirade against Prime Minister Narendra Modi had led to her being booked for sedition after she called the PM a “thief”. She later deactivated her Twitter profile after the Congress’s drubbing in the 2019 Lok Sabha elections. Ramya chose to keep away from state politics too.

This time, even as the party is busy scouting for winning candidates in Mandya and has decided to field former chief minister S.M. Krishna's brother S.M. Shankar's son Guru Charan from Maddur, Ramya has not been able to break the ice with Shivakumar.

Amid reports that independent MP from Mandya Sumalata Ambareesh (who defeated Nikhil Kumaraswamy, son of then incumbent chief minister H. D. Kumaraswamy) is preparing to join the BJP, party insiders say Ramya too is mulling over the prospect of contesting on a BJP ticket, but from a different constituency. Speculations are rife over the BJP’s plan to field Ramya from Bangalore Rural Lok Sabha constituency, which is held by the lone Congress MP and Shivakumar’s younger brother D.K Suresh.

Incidentally, in 2004, journalist-turned-politician Tejaswini Gowda, a protege of Shivakumar, who is now with the BJP, had emerged as a giant killer by defeating JD(S) patriarch Deve Gowda in the Bangalore Rural seat (previously Kanakapura constituency). This time, the BJP is perhaps hoping to wrest the seat from Suresh by fielding Ramya, a celebrity and a fellow Vokkaliga.

Ashwath Narayan’s response to the Twitter spat also came as a surprise as the minister said, “DKS had dialled the wrong number (by targeting me) and is facing the consequences. His own party leaders are condemning him. His conduct has embarrassed his own party leaders who regret that he is their party president. You can sympathise with a good man not with someone like Shivakumar. Hope he has realised the consequence of tainting the image of a woman.”

In a series of tweets, the Karnataka BJP claimed that the factional war in the Congress was once again exposed. “A corrupt party president has been called out by Ramya and is finding support from the Siddaramaiah faction. DKS, your enemies are gaining an upper hand and there is a traitor’s hand behind Ramya’s sudden outburst. The rival faction is trying to make a scapegoat out of DKS,” mocked BJP.

At 31, Ramya, a multilingual actress who had 39 films to her credit and bagged two Filmfare Awards (for Tananam Tananam in 2006 and Sanju Weds Geetha in 2011) quit films following her entry into electoral politics in 2013. Schooled in Chennai and Ooty, Ramya joined the Congress in 2011 and became one of the youngest MPs in the country within a span of two years.

The "Golden Girl of Kannada cinema' sure made her presence felt in politics during her stint as the party’s social media chief. Although Ramya was never fielded by the party in assembly elections (though Shivakumar had hinted she would contest either from Mandya or from Basavanagudi in 2018), she remained only as a “star campaigner”, a role she did not fancy much. She wanted the party to consider her as a serious leader. In one such instance, Ramya was miffed with the party leaders for asking her to sit among the film actors (star campaigners) during the party meeting convened by Shivakumar (then campaign committee chief) ahead of the 2018 polls. She chose to sit in the last row in protest and came to the dais after much persuasion from the leaders.

Even as the rumour mills are hinting at her jumping the ship to join the BJP, Ramya has neither confirmed nor dismissed such claims. When former chief minister S.M. Krishna, one of her political mentors joined the BJP, Ramya had chosen to remain with the Congress. This time, Ramya is at the threshold of change, as her outspokenness has irked many in the party. Her Twitter bio mentions “ work in progress” and her latest tweets are as intriguing as her previous one.

To a post with the picture of Shivakumar and M.B. Patil posing together for a photograph at Udaipur, Ramya responded with a “good job” tagging Surjewala.

Interestingly, in another tweet, she responded to a tweet by Union minister Nirmala Sitharaman’s office on her two-day visit to Karnataka (Udupi), suggesting that she must visit Kateel Durga Parameshwari temple. “If time permits, Nirmala ji you must visit Kateel Durga Parameshwrai temple, it’s quite close to Udupi. Not sure if you have been there before. One of the oldest and powerful temples around Udupi,” tweeted Ramya.