Jignesh Mevani sentenced to three months in prison for 2017 rally 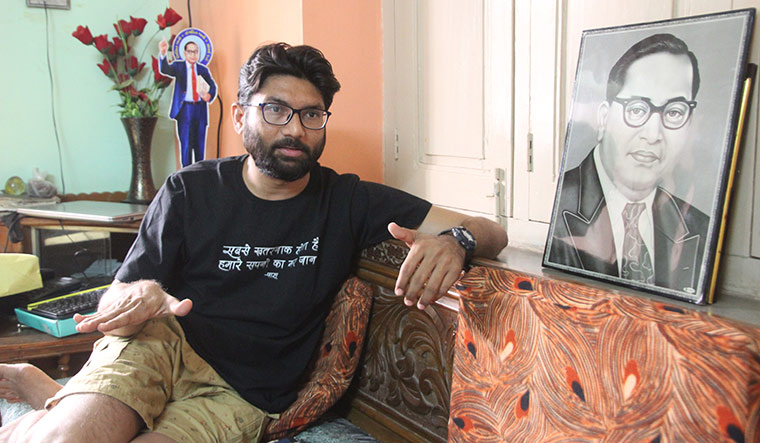 Two days after he returned to Gujarat after getting bail in a case related to alleged assault on a woman police officer, independent MLA from Vadgam Jignesh Mevani has been sentenced by a local court in Mehsana, North Gujarat to three months in prison and a fine of Rs 10,000 for taking out a rally without permission, in 2017.

Nine others, including his close associates Subodh Parmar and Kaushik Parmar, have also been sentenced to three months of imprisonment. Reshma Patel of the NCP also figures in the list of those sentenced.

Mevani told THE WEEK that they would appeal in the sessions court.

On July 12, 2017, Mevani, who was not an MLA then, had taken out a rally to mark the anniversary of mass flogging of Dalits in Una.

The 'Azaadi Kooch' taken out from Mehsana to Dhanera in Banaskantha district was to ensure that Dalits get physical possession of the land given by the state government to them. Mevani has been involved in a campaign in this regard.

While passing the order, additional chief judicial magistrate J.A. Parmar observed that taking out a rally is not an offence but holding it without permission amounts to one.

Mevani and his associates were present in the court when the judgment was pronounced. Youth leader and Congress leader Kanahiya Kumar, who had attended the programme, was also one of the accused, but a separate trial is to be held for him as he was not present in the previous hearings.

A fortnight ago, Assam Police had arrested Mevani for his alleged controversial tweet in which he had referred to Prime Minister Narendra Modi as a person who worships Godse. After he got bail in that case, he was arrested in another case of alleged assault on a cop. He was later granted bail.

On his return to Gujarat, the Dalit community members and the Congress gave Mevani a hero’s welcome. He also addressed a large public meeting in Vadaj.

Mevani is waiting for the dissolution of the state assembly to join the Congress.