ABVP alleged that hey were prevented from conducting puja 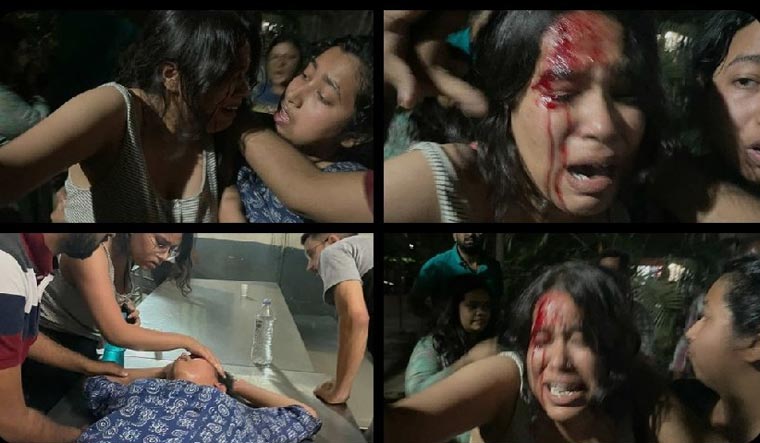 A scuffle broke out in the JNU campus between the students belonging to Left unions and members of ABVP following allegations that the ABVP stopped delivery of non-vegetarian food inside the campus on Ram Navami. Several students suffered injuries in the incident.

ABVP, in turn, alleged that hey were stopped from conducting puja on the oaccsion of Ram Navami.

According to various Twitter accounts, there were incidents of stone pelting inside the campus.

The secretary of one of the mess in one of the hostels in the campus was also attacked by the ABVP members.

"There is no violence as of now. A protest was held which is over. We are all positioned here with our team. On the request of the university, we have come here. We are trying to maintain peace," he said.

The JNUSU alleged that the ABVP, which is the student wing of the Rashtriya Swayamsevak Sangh (RSS), used "muscle power and goondaism" to create a ruckus, manhandling the staff and asking them not to prepare any non-vegetarian items.

ABVP goons stopped students from having nonveg food in mess followed by Stone pelting . Many students got severely injured.

This is what happens when the government promotes hyper nationalism.

"They were forcing and attacking the mess committee to change the dinner menu and exclude the usual non-vegetarian items in it for all students," it alleged.

Breaking: Violence breaks out at the mess of JNU's Kaveri Hostel, with several students suffering injuries.

Left student unions have blamed ABVP for instigating violence by preventing students from eating non-veg food that was being served in the mess.#MeatBan #JNU pic.twitter.com/dIr3IgrXUF

"JNU and its hostels are meant to be inclusive spaces for all and not one particular section," it said.

A Twitter user, posting visuals of students who are injured, said "sanghi goons.....don't have any fear of law."

"What is happening in JNU !," asked another.

"ABVP goons stopped students from having nonveg food in mess followed by Stone pelting . Many students got severely injured. This is what happens when the government promotes hyper nationalism," said a user.

"Violence breaks out at the mess of JNU's Kaveri Hostel, with several students suffering injuries," wrote another.