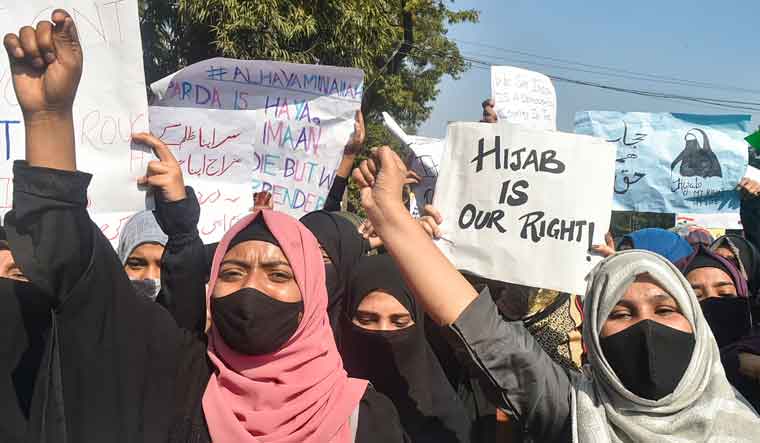 According to The Print, the terror outfit, in the March edition of its propaganda magazine Voice of Hind said, "Every Hindu coward putting an eye on the honour of our sisters will be slaughtered into pieces mercilessly."

It claimed that the ban on hijab in educational institutions in Karnataka is planned by the BJP to "undress and humiliate Muslim women publicly” and said the controversy is being used to disempower young Muslim women.

It alleged that the hijab row in Karnataka is part of a global conspiracy to demonise Muslims, and cited the examples of France, the Netherlands and Switzerland where there are progressive attempts being made to assimilate Muslims into the society.

The magazine also accused the Muslim women in India of adopting to western customs which is causing harm to them. “The dilution also led to a degradation of its image in the eyes of believers who, drunk in the fervour of western ways, started to reject it and consider it conservative,” it read, reports The Print.

The Karnataka High Court, on Tuesday, said hijab was not part of the essential religious practice in Islam and effectively upheld the ban against the headscarf in educational institutions while dismissing a batch of petitions filed by a few Muslim girl students from Udupi Government Pre-University Girls' College who sought permission to attend classes wearing hijab.

The court had also suggested the possibility of some “unseen hands” behind the hijab row to engineer social unrest and disharmony. "The way hijab imbroglio unfolded gives scope for the argument that some 'unseen hands' are at work to engineer social unrest and disharmony. Much is not necessary to specify," the three-judge bench headed by Chief Justice Ritu Raj Awasthi had said in the order.