Why India abstained from voting in UN resolution against Russia

Russia has stood by India on the international platform 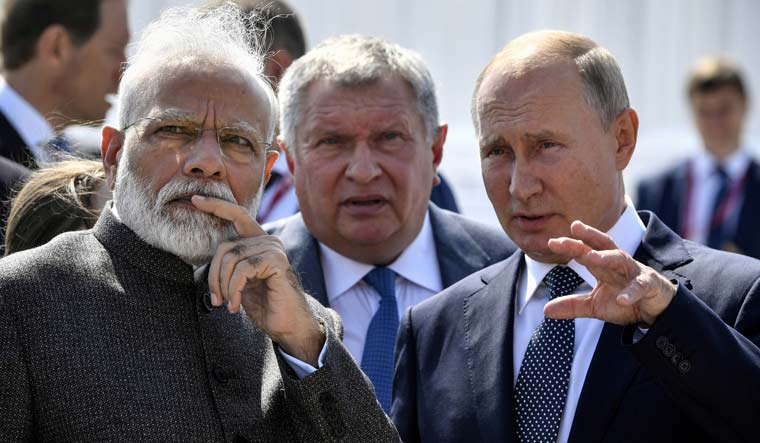 At his press briefing on Thursday, Foreign Secretary Harshvardhan Shringla had mentioned that the United Nations Security Council was preparing a draft resolution on the Russia-Ukraine situation, and that India would make its stand clear only after a proper study of the document. By the time the news came that India had abstained from the vote on the US-backed resolution vote to condemning the invasion on Ukraine and asking Russia to withdraw, it was not a surprise, why.

India's abstention, says Dilip Sinha, former permanent representative to the UN in Geneva, is in line with its position in the past. When it comes to voting on an issue concerning the big powers, especially their intervention in another country, India decides to stay away, he said. In 2011, for instance, when India was a non-permanent member in the UNSC and there was a vote on a no-fly zone over Libya, India decided to abstain (as did Russia and China). “So, this time, even if it is a blatant invasion of another country, I am not surprised that we abstained.''

In a world where dynamics have changed majorly over the last seven decades, the one steadfast relationship India has had is with Russia, formerly the Soviet Union. That relationship is largely based on military cooperation. Though India has developed far deeper economic and people-to-people linkages with the western world over the decades, the strength of India-Russia ties has remained. It is the constant that the western world has to factor in when forging new relations with India (read Indo-Pacific and the Quad). “They know that there is only this much they can expect from India; they cannot push beyond a point,'' says Harsh Pant, Observer Research Foundation.

Russia has stood by India on the international platform, whether it was rooting for a membership in the Nuclear Suppliers Group or a permanent seat in the UNSC. Both memberships are still elusive, mainly because of China. Russia got India into the Shanghai Cooperation Organisation (SCO).

More importantly, India is largely dependent on Russian military help to keep the Chinese threat at bay. It was not a matter of for or against anyone; India's stand had to be reflective of what was best for it.

Russia naturally exerted its veto power as a permanent member of the UNSC, but interestingly, China, which could have done so, too, decided instead to abstain from the vote. So did the UAE. India explained in its Explanation of Vote (EOV) that it had called for a return to the path of diplomacy, respecting sovereignty and territorial integrity of states and an immediate cessation of violence and hostilities. It stressed that dialogue is the only answer to settle differences, regretting that the path of diplomacy had been given up. By abstaining, India retains the option of reaching out to relevant sides in an effort to bridge the gap and find the middle ground with an aim to foster dialogue and diplomacy.

What will be the outcome of India's decision in its interaction with the rest of the world, especially with in the new groupings like Quad? “The West knows India's position vis a vis Russia,'' says Pant. “Thus, the US let go the S-400 anti-missile deal for India, but imposed sanctions on the sale when it came to Turkey. So far, they have understood, but if the situation changes drastically over the coming weeks, we may see the US invoking CAATSA (Countering America's Adversaries Though Sanctions Act) with regard to military purchases from Russia,'' says Pant.

It was largely because of India's hesitation that the Quad has remained a grouping with a multi-faceted approach to cooperation in healthcare and infrastructure, trade and even education, rather than a declared military grouping, like North Atlantic Treaty Organisation (NATO). India's hesitance with taking the Quad forward was removed only when the Chinese started getting aggressive for Indian territory. It is only recently, late last year, that the Quad leaders' summit was finally held in a physical format. They will meet later this year in Tokyo again. AUKUS (Australia-UK-US), a trilateral that was announced with suddenness last year, is largely perceived to fill the big lacuna that Quad cannot – a military tie-up. Ironically, the Malabar exercise, in its last iteration, had all Quad members, so it was, in effect, a Quad military drill.

At the Quad ministers’ summit in Australia recently, External Affairs Minister S. Jaishankar reiterated that the Quad is for something, not against anyone. Russia, of course, has always made the right noises about India's new club memberships, saying that it appreciates India's intentions.

Is today's development indicative that a new front, like the Non-Alignment Movement, will emerge now? “The problem with the creation of a new, third front is that there is no unifying cause or agenda binding them. Each country is looking at its own national interests. Even Europe is not on the same page with imposing swift sanctions on Russia,'' says Pant.

India's vote position today, however, might have bigger repercussions. If nothing else, it has certainly annoyed the US, which may not be so amenable to turning a blind eye on military purchases in the future, says Sinha.

A bigger worry for India, however, beyond this vote is the long-term effect of Russia's isolation from the world. The more isolated Russia gets, the more it will lean closer to China, and that is certainly not in India’s interests. Will India be back in a situation like 1972, when the Chinese invasion saw India left completely to itself?

India's EOV for this resolution is interesting. In its first points, it actually condemns the invasion, yet it finally abstains. Is it trying to keep everyone happy? Will it succeed, and to what extent? Only time will tell.