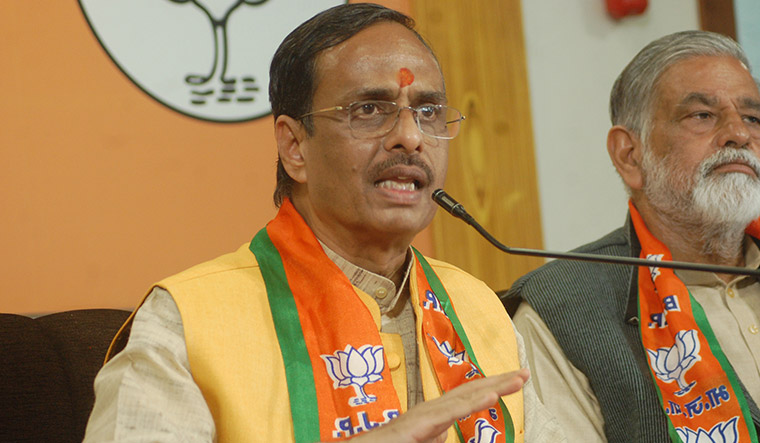 Rival parties, including Congress, Samajwadi Party, and Bahujan Samaj Party, will not be able to get 100 seats together in the upcoming Uttar Pradesh polls, BJP leader Dinesh Sharma said on Sunday.

Sharma, the deputy chief minister of UP, said the BJP is fighting the election on development issue and hit out at the opposition parties for encouraging criminal elements, communalism in state's politics.

“The elimination of regionalism, family politics and mafia-rule is the objective of the BJP, which fights polls on agendas of development,” he told reporters while campaigning for party's Tejpal Nagar in Dadri.

“I feel western Uttar Pradesh will break its own previous record by supporting the BJP with more votes this time.”

On Priyanka Gandhi Vadra denying she is Congress' CM candidate, Sharma said he need not say much about it as TV surveys are forecasting a mere three to seven seats for her party.

“Their combined figures in the upcoming polls will not reach three-digit,” the deputy CM said predicting opposition parties tally.

“The BJP will get over 50 per cent of the votes and break its own record of securing votes in the state,” he said of his party, which had stormed to power in 2017 with over 300 MLAs in the 403-member assembly.

Sharma alleged earlier political parties in UP would harp on communal issues and polarise minority voters, even winning elections in the past.

“But the people of UP have now tasted the benefits of development. Now there is no space for caste-based or communal politics,” he said.

Sharma claimed there is a “rising fear” in public that mafia and criminal elements will come back again in the state as some opposition parties have fielded criminals or their family members as candidates for polls.

“There are also some criminals who are openly supporting some parties, indirectly warning people that if people do not support them the criminals will create an atmosphere of terror. This should not happen, the state has changed now.”

“UP is no longer a state of 'exodus' but a state of development. Anti-social elements do not have any place in UP now. Their place has been replaced by development, jobs, good health, education, and these are the agendas of the BJP."

BJP has fielded sitting MLA Tejpal Nagar once again from the seat, which has 15 other candidates in fray. The results will be declared on March 10.