Hologram will be unveiled at same spot on January 23 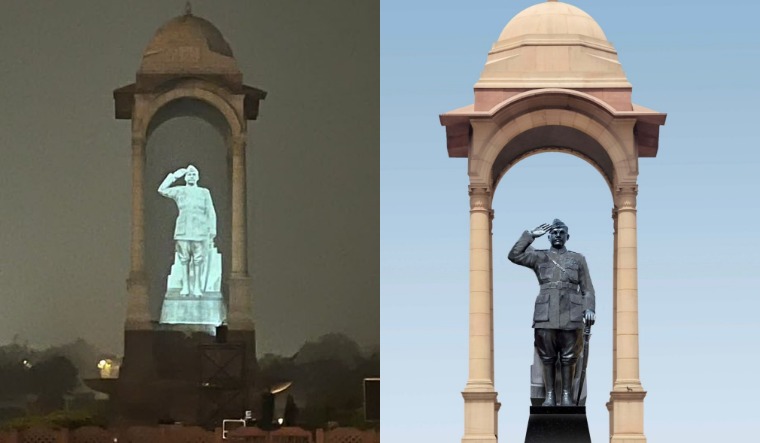 A collage showing the hologram, on left, and the proposed statue | Twitter handle of Narendra Modi

Even as Amar Jawan Jyoti is at the centre of controversy, Prime Minister Narendra Modi on Friday announced another major change to India Gate.

Modi announced that a “grand” statue of freedom fighter Subhas Chandra Bose would be installed at India Gate. Modi tweeted an image of the proposed statue.

Modi tweeted, “At a time when the entire nation is marking the 125th birth anniversary of Netaji Subhas Chandra Bose, I am glad to share that his grand statue, made of granite, will be installed at India Gate. This would be a symbol of India’s indebtedness to him.”

He also added that until the statue is completed, a hologram of the structure would be in its place. Modi tweeted he would unveil the hologram statue on January 23, the birth anniversary of Bose.

Modi and the BJP have promoted Bose as an icon and have repeatedly alleged previous governments had not honoured him.

Earlier this month, the government had announced Republic Day celebrations would commence from January 23 annually to commemorate the birth anniversary of Bose.

The announcement of the Bose statue comes as opposition parties and some veterans have criticised the decision to merge the eternal flame at Amar Jawan Jyoti with the one at the National War Memorial.

BJP national spokesperson Gaurav Bhatia welcomed the decision to build a Bose statue and alleged the Congress had attempted to “belittle” the late leader. Bhatia tweeted, “Historical wrongs are being corrected. Netaji Subhash Chandra Bose was denied due recognition he so richly deserved. Cheap politics was played by the Congress to belittle him. After Statue of Unity & Netaji's Statue. Heartfelt gratitude.”