Telangana: Decoding political strategy of TRS amid tussle with BJP 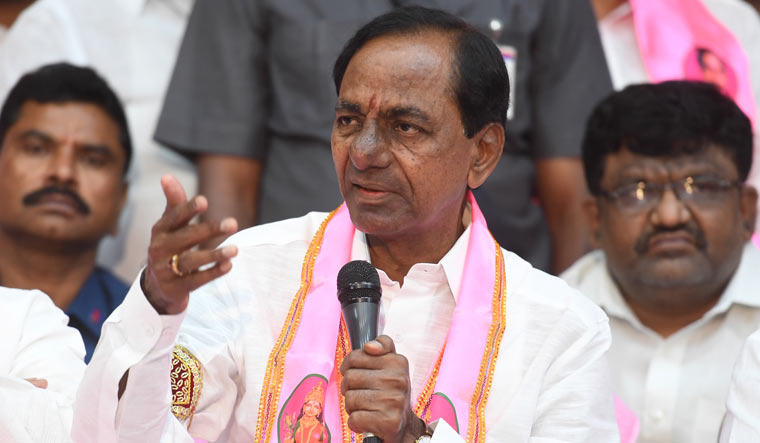 In a press meet in late 2018, Telangana Chief Minister K. Chandrasekhar Rao was asked about the BJP’s prospects in the upcoming assembly polls. He dismissed the saffron party and its members by labelling them “gareeb” or poor people who are in a pitiable position in the state. The BJP at that time had five seats in the 119 member Telangana assembly. In the following elections, the BJP won just one seat. In the last three years, the BJP managed to win two hard-fought elections, increasing its tally to three. The representation of the BJP has thinned in the legislative assembly since last term but in the eyes of the ruling party, the BJP’s stature has been upgraded to that of a formidable opponent.

After the last by-election which took place for Huzurabad constituency, TRS president KCR has been singling out the BJP in his attacks. The issue of paddy procurement played on for weeks as TRS and BJP leaders traded barbs. Unusual and hard to miss was how the Congress was left out while BJP top leaders including its state president Bandi Sanjay got mentioned directly and indirectly by the ruling party leaders who at one point gave an impression that it was not worthwhile to talk about the BJP and its leaders.

A few days back BJP president Bandi Sanjay was arrested and sent to judicial remand. He was protesting against a government order which enforced zonal system for jobs. The protest was taking place at the MP’s office in Karimnagar. The confrontation between the police and BJP leaders and cadre intensified towards evening as the law enforcers cited COVID-19 violations to declare the gathering as unlawful. Visuals of violence and arrests soon circulated. The action of the administration took some of the BJP leaders by surprise.

“It was not a large protest. There were around 300 to 400 protestors. The police were near the venue all along. We don’t know why they reacted so strongly and arrested Sanjay. They could have just dispersed the crowd or taken him into custody and shifted him to another police station which is usually the norm. Arresting him only got us more mileage,” said a second-rung BJP leader from Karimnagar.

Later, Sanjay secured a bail and got released from prison but what the entire episode did was kickstart a campaign where BJP national leaders descended in Telangana, one after the other, to support the jailed leader and attack TRS. In response, TRS leaders also started countering the BJP leader's comments.

Those in political circles and analysts see the entire chain as a strategy of the TRS which achieves two purposes. First, by directly aiming for Sanjay with harsh words and actions, the TRS may have wanted to divert the attention from its former member and now BJP leader Eatala Rajender and curtail his rise within the national party. To a great extent, the pink party achieved it as there is lesser coverage about Rajender and his future in the BJP. At the same time, Sanjay’s position has strengthened within the BJP and also as an opposition leader due to the ongoing verbal clashes with TRS.

Second, the TRS may be propping up the BJP so as to split anti-incumbency votes and ensure the Congress doesn’t emerge stronger. Despite large defections, the Congress is still a traditional political force in Telangana and a chance of its comeback cannot be completely ruled out.

The TRS also seems to be getting active when it comes to national politics. Recently, Tejashwi Yadav, the all-powerful leader of RJD, landed in Hyderabad in a chartered flight along with his party leaders. He met KCR and his son and working president of TRS, KT Rama Rao. KCR also spoke to Lalu Prasad Yadav over phone. The agenda of the meeting was not officially conveyed but as per sources in the chief minister’s team, what came up for discussion was BJP policies and how to counter the national party. It may be recalled that in 2018, TRS mooted the idea of a federal front or a non-BJP and non—Congress front. The chief minister, at that time, had also met his counterparts such as Mamata Banerjee, Naveen Patnaik, Pinarayi Vijayan and a few opposition leaders such as Akhilesh Yadav and even Stalin. The idea failed to materialise in the last term. The party once again seems to be working towards making it a reality and trying to collect friends for this venture. Last week, KCR met Left leaders including Kerala CM and CPM leader Pinarayi Vijayan. Prior to that, he met DMK head and Tamil Nadu Chief Minister M.K. Stalin.