The train derailed in Dohomoni area of Jalpaiguri district 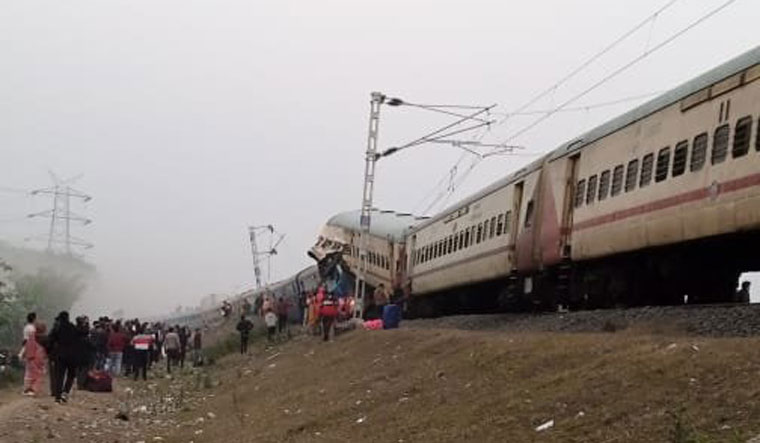 At least five persons were killed and 45 others injured as the Guwahati  - Bikaner Express train derailed and overturned in Dohomoni area of West Bengal's Jalpaiguri district on Thursday evening.

According to the Railways, twelve coaches of the train derailed in the accident that occurred around 5 pm in an area under Alipurduar division of Northeast Frontier Railway. District Railway Manager (DMR) and the Assistant Divisional Railway Manager have rushed to the site along with an accident relief train and medical van.

The Railways has announced Rs 5 Lakh ex-gratia for those killed, Rs 1 lakh for the severely injured and Rs 25,000 for passengers who suffered minor injures. Commissioner, Railway Safety, will conduct an inquiry into the cause of the accident, a railway official said in New Delhi.

"Deeply concerned to hear about the tragic accident of the Bikaner-Guwahati Express in Maynaguri. Senior Officers of the State Government, DM/SP/IG North Bengal are supervising rescue and relief operations. Those injured will receive medical attention, as early as possible," she tweeted.

Prime Minister Narendra Modi, who was in the middle of a meeting with chief ministers to review the COVID-19 situation, inquired West Bengal CM Mamata Banerjee about the accident. Banerjee, who had spoken to the Jalpaiguri district magistrate, briefed the the prime minister about the relief and rescue operations.

TV footage showed a number of coaches lying sideways down the elevated tracks as rescue workers were seen trying to extricate the passengers. According to a PTI report, a partially mangled coach got perched atop another under the impact, while a few bogies had hurtled down the slope and overturned.