1.6 metric tonnes of life-saving medicines were on a return flight 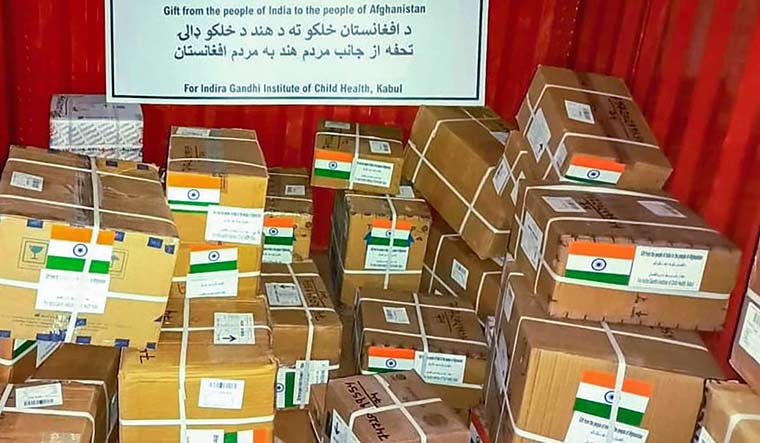 In the first tranche of humanitarian aid to Afghanistan after its takeover by the Taliban, India on Saturday sent 1.6 metric tonnes of life-saving medicines to that country in sync with its commitment of extending help to the Afghan people in their times of difficulty.

The medical supplies were sent on a return flight that had brought 10 Indians and 94 Afghans to Delhi from Kabul on Friday.

Describing the aid as a "gift from people of India", Afghan ambassador Farid Mamundzay said the medicines arrived in Kabul and that they will help many families in this "difficult time".

The Ministry of External Affairs (MEA) said the consignments will be handed over to the representatives of the World Health Organisation (WHO) in Kabul.

"In view of the challenging humanitarian situation in Afghanistan, the government of India has dispatched humanitarian assistance consisting of medical supplies on the return flight today," the MEA said.

"These medicines will be handed over to the representatives of the World Health Organisation (WHO) in Kabul and will be administered at the Indira Gandhi Children Hospital, Kabul," it said in a statement.

Though the MEA did not specify the quantity of the supplies, the Afghan envoy said it is 1.6 metric tonnes of life-saving medicines.

"The first consignment of medical aid from India arrived to Kabul this morning. 1.6 metric tonne of life saving medicines will help many families in this difficult time," he tweeted.

A number of Afghan nationals stranded in India also returned home on board the flight.

India has been pitching for providing unimpeded humanitarian aid to Afghanistan to address the unfolding humanitarian crisis in the country.

At the same time, India has been calling for the formation of a truly inclusive government in Kabul while insisting that Afghan soil must not be used for any terrorist activities against any country.

India has already announced that it will send 50,000 tonnes of wheat and medicines to Afghanistan by road transport through Pakistan. India and Pakistan are now finalising the modalities for transportation of the consignments.

The MEA said the special flight from Kabul to Delhi, chartered by India, brought 10 Indians and 94 Afghans on Friday.

"The flight brought 10 Indians and 94 Afghans, including members of Afghan minority community. The minority community members carried with them two 'Swaroops of Guru Granth Sahib' and some ancient Hindu manuscripts," it said.

The people were brought under India's "Operation Devi Shakti" which was launched to evacuate Indians as well as Afghans from Afghanistan following the Taliban's takeover of Kabul on August 15.

"Under 'Operation Devi Shakti', a total of 669 people have now been evacuated from Afghanistan. This comprises 448 Indians and 206 Afghans, which includes members of the Afghan Hindu/Sikh minority community," the MEA said.

As many as 565 people, including 438 Indians, were evacuated from Afghanistan in the month of August.

India has been concerned over the recent developments in Afghanistan.

It hosted a regional dialogue on Afghanistan on November 10 that was attended by NSAs of Russia, Iran, Kazakhstan, Kyrgyzstan, Tajikistan, Turkmenistan and Uzbekistan.

The participating countries vowed to work towards ensuring that Afghanistan does not become a safe haven for global terrorism and called for the formation of an "open and truly inclusive" government in Kabul with representation from all sections of Afghan society.

A declaration released at the end of the Delhi Regional Security Dialogue on Afghanistan said Afghan territory should not be used for sheltering, training, planning or financing any terrorist acts and that officials lent strong support for a peaceful, secure and stable Afghanistan.