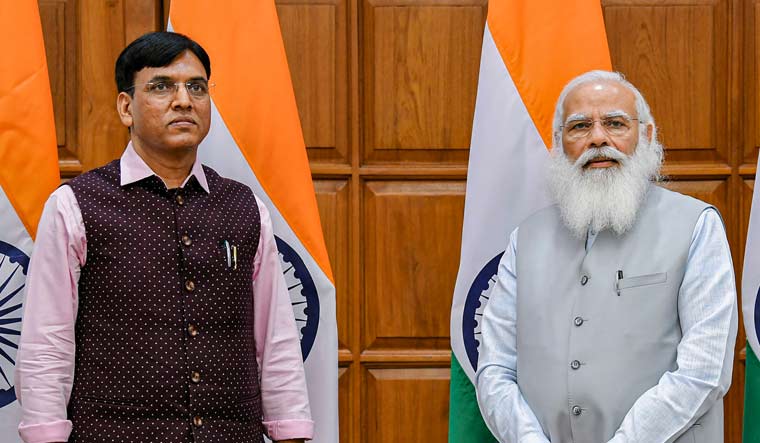 Union Health Minister Mansukh Mandaviya told Lok Sabha that over 85 per cent of country's eligible - 18 years and above - population has received the first dose of COVID-19 vaccine, while 50 per cent has received both the doses. He said the country has already administered 125 crore doses, while another 22 crore doses were available with the states, and with latter's initiative the government will achieve full target.

Mandaviya was replying to the discussion on COVID-19 in Lok Sabha that started on Thursday in which 75 members participated. Reacting to criticism, he gave out figures on how Modi government had ramped up health infrastructure in the last two years to deal with the pandemic.

As vaccination was one the key elements in battle against COVID-19, Mandaviya said there were 94 crore eligible people in the country.

Addressing demands for a booster dose and vaccine for the children, he said there were two options available before the government: to take a political decision or go by scientific advice.

“We will go by the expert opinion, whenever the panels set up by the government give their views.”

Mandaviya assured the House that enough precautions were being taken by the government to deal with the new Omicron variant. It has been detected in 29 countries, and there were 373 known cases. South Africa declared Omicron on November 25, and the same day, PM Modi held a meeting, followed by meeting by health secretary with all states. A revised travel advisory was also issued.”

He said all the COVID-19 samples of those who tested positive at airports, and infected contacts of the two known cases in India, have been sent for genome sequencing.

The minister said the government was creating infrastructure at the district level so that they be able to deal with any pandemic like situation for the next 50 years.

The health minister said many members raised the issue of faulty ventilators. “Before COVID, we had only 16,000 ventilators in the country. After the first and second wave, the demand increased. A study said we need 75,000 ventilators. The government placed an order for 58,000 ventilators of which 97 per cent order was given to state-run agencies. Of these, 50,200 ventilators were delivered, and 48,000 installed. There was demand for trained manpower, we asked the companies to train manpower in hospitals. Till now, we have 42,000 certificates from state government on their instalment, proper working, and adequate manpower.”

He said his ministry was waiting for another 6,000 certificates from the state governments before they could release money to the manfacturers.

Referring to vaccine development programme, he said “Modi government was proactive in the development of vaccine as it created a consortium of 37 labs working in field of genome sequencing, which were brought on same platform. Modi made funds available to scientists. It was for first time that India developed vaccine along with rest of the world. Now, 70 per cent of vaccine in the world is provided by India.”

He said the Centre also released Rs 70,240 crore to states under various heads to deal with the crisis.

He said 3,000 labs for COVID testing were operational now, which can test over 3 lakh samples every day. He said 1,225 oxygen plants were set up, while another 3,829 plants were being set up by other agencies and NGOs of which 70 per cent were already installed.