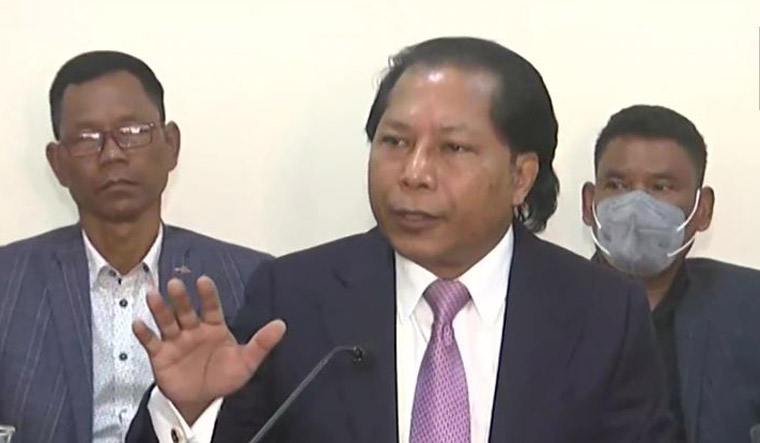 Twelve of the 17 Congress MLAs in the Meghalaya Assembly on Thursday joined the Trinamool Congress, dealing a body blow to the grand old party in the northeastern state, their leader and former chief minister Mukul Sangma said.

He said the decision to shift allegiance to Mamata Banerjee's party was taken after “exhaustive due diligence and analysis about how best to serve the people. The decision has been taken with utmost sense of humility, responsibility and commitment towards fulfilling our responsibility to the people, the state and the nation,” he told a press conference.

In a massive jolt to the main opposition Congress, they had decided to join the TMC in a late-night development on Wednesday.

The breakaway group had also submitted a list of MLAs crossing over to the TMC to Assembly Speaker Metbah Lyngdoh and informed him about their decision.

The development is a major boost for West Bengal Chief Minister and TMC supremo Mamata Banerjee, who has been trying to expand her party's footprint beyond her native state.

Meanwhile, the mouthpiece of the TMC, Jago Bangla, in an editorial on Thursday blamed the Congress for its workers leaving the party.

“The Congress has serious problems. Whenever any of its leaders join the TMC, it criticises us. It seems that its West Bengal unit chief Adhir Ranjan Chowdhury has more problems with it than the central leadership. The Congress has failed to put up a fight against the BJP. On the other hand, Mamata Banerjee and the TMC have shown how to defeat the Modi-Shah juggernaut. That is the reason why the TMC is getting requests to open units in other states. Leaders are willing to join us. They feel that Mamata Banerjee is the alternative face. The TMC can't be blamed for incompetence and incapability of the Congress to fight against the BJP,” Jago Bangla said.