Parvez has faced problems due to the nature of the work the JKCCS, APDP do 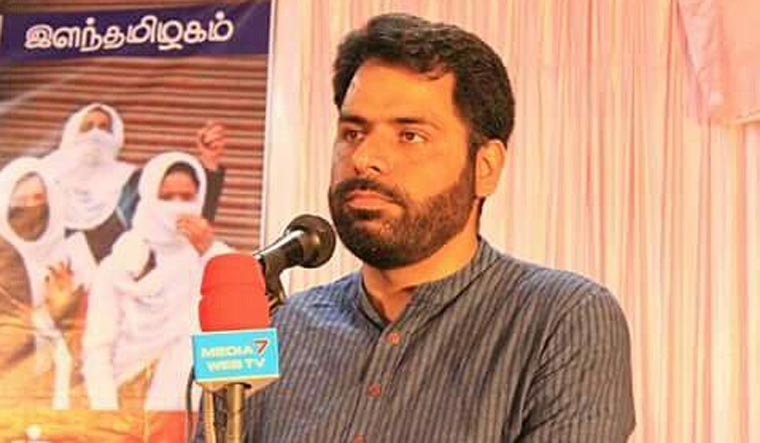 Kashmiri activist Khurram Parvez, who was arrested by the NIA on Monday, has been among the most authoritative voices on human rights in the region in the last two decades. In 2006, he was given the Reebok Human Rights Award.

Parvez has been slapped with charges like criminal conspiracy, attempting to wage war against the government, raising funds for terrorists and recruiting of any person or persons for terrorist acts.

He is likely to be taken to Delhi on Tuesday by the NIA.

A resident of Srinagar’s Sonwar, Parvez did his schooling from the Burn Hall School at Sonwar, which is run by Christian missionaries. He holds a masters degree in mass communication and journalism from Kashmir University. He also studied at the University of Glasgow.

He is married and has a son. His wife, Sameena Khurram, works in the Jammu and Kashmir government.

In April 2004, Parvez lost his right limb in a landmine blast that hit the vehicle he was travelling in at Chandigam in Kupwara while monitoring Parliamentary elections. Fellow human rights activist Asiya Jeelani and driver of the vehicle, Ghulam Nabi Sheikh, were killed in the blast while three more volunteers of Jammu Kashmir Coalition of Civil Society (JKCCS), including one from Karnataka, were injured.

The JKCCS is an amalgamation of various non-profit, campaign, research and advocacy organisations based in Srinagar. It operates from Srinagar’s Amira Kadal, from an old three-room office on the banks of the Jhelum. It was founded by human rights lawyer and civil rights activist Parvez Imroz in Srinagar. The JKCCS also works to build local alliances between Kashmiri civil society groups. Imroz is also convener of the International People's Tribunal on Human Rights in Jammu and Kashmir.

The JKCCS office has been an important stop on the itinerary for foreign journalists and civil rights activists and diplomats who visit Kashmir.

The JKCCS documents cases of rights violations through reports, programmes, documentation and litigation, and supports the right to self-determination of people of Jammu and Kashmir.

Parvez is also the chairperson of Asian Federation Against Involuntary Disappearances (AFAD).

The constituents of the JKCCS include Association of Parents of Disappeared Persons (APDP). The association was established in 1994 to bring together families whose kin had disappeared after allegedly being taken into custody by the security forces in Jammu and Kashmir. They used to visit the Jammu and Kashmir High Court to file or to pursue Habeas Corpus petitions. The APDP provided such families a platform to pursue their struggle lawfully.

The JKCCS hogged the limelight in 2009 when it alleged the presence of mass graves in a report titled Buried Evidence.

The report claimed the presence of 2,700 unmarked single or mass graves spanning 55 villages in north Kashmir’s Kupwara, Baramulla and Bandipora districts. The report created a sensation and the EU called for an investigation into the matter.

In 2017, the APDP also claimed the presence of 3,844 graves in Rajouri and Poonch districts of Jammu and petitioned the State Human Rights Commission (SHRC)—which was abolished by the BJP government after the revocation of Article 370—for a probe to uncover the truth. The commission acknowledged the unmasked graves and ordered DNA sampling of the bodies to compare with the families of disappeared persons.

Parvez has faced problems due to the nature of the work the JKCCS and APDP is involved in.

On September 15, 2016, he was arrested under Public Safety Act due to which he could not attend the 33rd UN Human Rights Council session in Geneva to brief UN bodies about the situation of human rights in Jammu and Kashmir. He was released after 76 days.