Rintu Singh had lodged a complaint on Nov 3, stating he feared a threat to his life 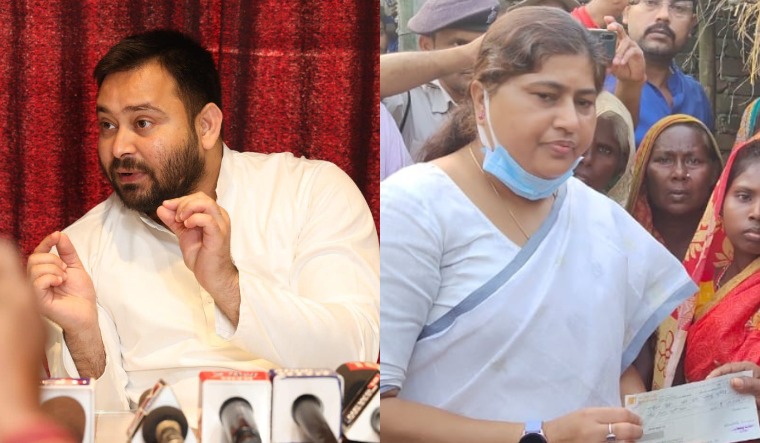 A collage of Tejashwi Yadav, on left, and Leshi Singh | Official Facebook accounts

RJD chief Tejashwi Yadav on Sunday alleged that a minister in the Nitish Kumar government in Bihar was involved in the killing of a former Zilla Parishad member in Purnia district.

According to reports, Vishwajeet Singh, alias Rintu Singh, was the deputy district president of the Congress in Purnia and had been a journalist.

Rintu was allegedly shot dead by two people on a motorcycle near the Sarsi police station in Purnia on Friday evening.

Hindustan Times reported that Rintu Singh had lodged a police complaint on November 3, stating he apprehended a threat to his life from Ashish Singh, the nephew of Leshi Singh, the Minister for Food and Consumer Protection in the state.

Rintu Singh had filed a complaint after he was allegedly shot at. The Purnia Police said the SHO of the Sarsi station had been suspended following the killing of Rintu Singh.

Tejashwi told mediapersons on Sunday, “SHO has been suspended but when deceased's relatives are clearly accusing Leshi Singh and her nephew, then why is state government and its head silent?”

Tejashwi demanded that Nitish set a time frame on when he would remove Leshi Singh. “How many women [must] become widows before Nitish Kumar wakes up? He should give a clarification and sack the minister,” Tejashwi was quoted as saying by ANI.

Tejashwi told mediapersons, “There is Maha Jungle Raj in Bihar. There is a dreadful noise of rape, robbery and murder all over the state. Corruption is at its peak due to administrative chaos in Bihar.”

Leshi Singh has previously been accused of links to criminals. Hindustan Times reported “In 2020 assembly polls, brother of one Bittu Singh, a notorious criminal who was then in jail, was shot dead in the same area. The family had then accused Leshi Singh of patronising criminals who committed the crime.”