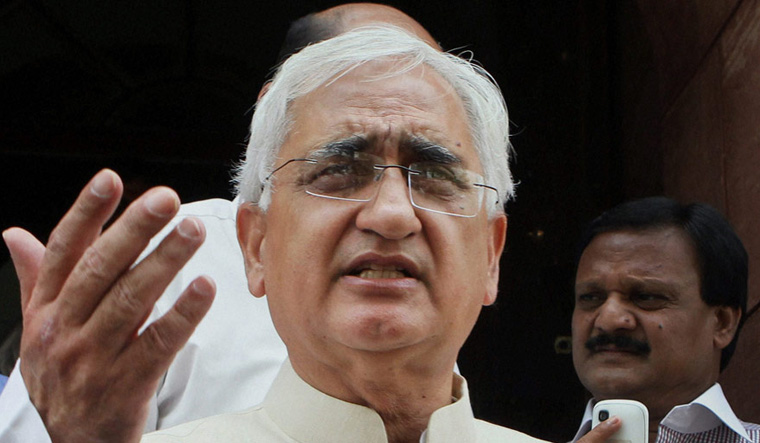 Right-wing group Hindu Sena, on Friday, demanded a ban on Congress leader Salman Khurshid's book 'Sunrise Over Ayodhya: Nationhood in Our Times', alleging that his statement comparing Hindutva to the jihadist Islam of terror groups harms social integrity and hurts the religious sentiments of Hindus.

In a letter to Union Home Minister Amit Shah, Delhi Lieutenant Governor Anil Baijal and Chief Minister Arvind Kejriwal, Hindu Sena president Vishnu Gupta said the comparison made in the book is an attempt to demonise the Hindu religion.

Two advocates have already filed complaints with the police against Khurshid's comments, while several BJP leaders have sought action against him.

In his letter, Gupta said, "This book comparing Hindutva/Hinduism to terror outfit ISIS and Boko Haram is an attempt to demonise the Hindu religion. These kinds of statements in a book can give publicity to the book but this harms the social integrity and hurts the sentiments of millions of Hindus residing in the country and all over the world."

"Therefore, I request you to kindly look into the matter and put a stay on publication/circulation and sale of the book and also ban the book or take appropriate action as per Indian laws applicable," he wrote in the letter.

In a chapter titled 'The Saffron Sky', Khurshid writes: "Sanatan Dharma and classical Hinduism known to sages and saints were being pushed aside by a robust version of Hindutva, by all standards a political version similar to the jihadist Islam of groups like ISIS and Boko Haram of recent years."

According to Gupta, the excerpts from the book, besides being "instigating and provoking", hurt the religious sentiments of a large number of people who follow the Hindu religion.

"Our Constitution provides every citizen of India with the freedom of speech and expression but not for misuse of the right when it threatens and shakes the harmony of the country," he claimed.

He also said the Supreme Court, in a 1995 judgement, laid down the proposition that "Hindutva is not a religion it is a way of life and state of mind".

The 354-page book, which claims to analyse the juridical history and consequences of the long-standing Ayodhya dispute, was released on Wednesday.