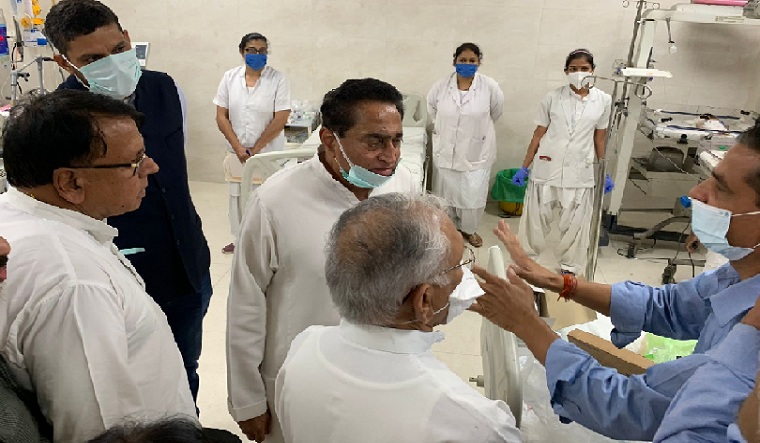 Opposition Congress has accused the BJP government in Madhya Pradesh of hiding the death figures in the fire incident at Bhopal government hospital. Former chief minister and MP Congress president Kamal Nath has called for a probe monitored by a sitting high court judge.

According to the government, four infants were killed in the fire that broke out in the special newborn care unit (SNCU) of the Kamla Nehru Hospital in Bhopal late on Monday night.

Former CM and and BJP leader Uma Bharti, too, has raised questions over the incident, especially about the fire audit of the hospital and called for strict punishment to those responsible.

Chief Minister Shivraj Singh Chouhan has assured strictest action on those responsible for the 'criminal negligence' and has directed renewed fire safety audits for all private and government hospitals in the state. He commended the doctors, nurses and paramedical staff who helped in rescue operations and said they would be formally honoured.

Medical Education Minister Vishvas Sarang however reiterated on Tuesday that the death toll was four and that 36 other infants admitted to the SNCU were rescued safely. Other kids admitted to different wards of the paediatric department on the same floor are also safe while six kids have been shifted to JP District Hospital for further treatment, he said.

However, after visiting the hospital and talking to the kin of the admitted kids, Kamal Nath said that the incident was not a matter of politics but of grave negligence. He said a case of murder should be registered against those responsible and the medical education minister should be removed from his post.

Kamal Nath said that this was the third fire incident on the Hamidia Hospital campus (where Kamla Nehru Hospital is situated) within six months.

“The BJP government tries to suppress all such incidents. In this case, too, death figures are being hidden, as during the COVID-19 pandemic when 2.5 lakh were killed in the state, but the government kept suppressing the figures. This government wakes up only after some major incidents and talks of taking action as it is doing now,” Kamal Nath said.

He alleged that the fire system of the hospital was not working and there were no arrangements for fire fighting. The fire seemed to erupt out of short circuit.

Kamal Nath called for a probe monitored by a sitting judge of the high court, while taking exception to the fact that “those responsible for the incident are conducting the probe”. The CM has nominated additional chief secretary of public health and medical education, Mohammad Suleman to probe the fire incident.

Kamal Nath also alleged that the kin of the admitted kids were not being allowed to meet them and that he himself saw the frightening conditions in the hospital where 100-odd children were admitted. Nath also said that the deaths of the kids will make no difference to the BJP as the party is now focussing on a mega event (tribal convention to be attended by PM Narendra Modi) in Bhopal on November 15.

Senior BJP leader Uma Bharti questioned through a series of tweets as to when the fire safety audit of the paediatric ward in Kamla Nehru Hospital was undertaken last. She also said that points like who was responsible for maintenance and monitoring of the hospital, how much budget for this purpose was released and when, should be probed and the strictest punishment should be given to those responsible. Bharti said she has spoken to CM Chouhan over phone in this matter and he, too, was very sad about the incident. “I offer most sincere condolences to the families of the dead infants. Their misery cannot be compensated but strict action against the criminals will ensure following of rajdharma,” Bharti said.

Fault in warmer led to incident? No fire NOC taken?

Though the probe is still on, initial investigations have revealed that one of the warmers in the SNCU developed a fault and caught fire, which spread all across the 10 warmer beds, sources said. The fault was not noticed in time, they said. Meanwhile, there are also reports that the Kamla Nehru Hospital authorities failed to take the requisite fire no-objection certificate (NOC) from the Bhopal Municipal Corporation (BMC) despite multiple notices and that the fire hydrants and extinguishers on the hospital campus were not working. The maintenance of the hospital is with the Capital Project Authority (CPA), an agency that the CM has directed to be disbanded recently.

On Tuesday, the Bhopal divisional commissioner Gulshan Bamra, who heads the Hamidia Hospital management, convened a meeting. It was decided that the children's ward will be immediately shifted to the new building of the Hamidia Hospital from the Kamla Nehru Hospital premises and the maintenance will be handed over to the public works department (PWD).