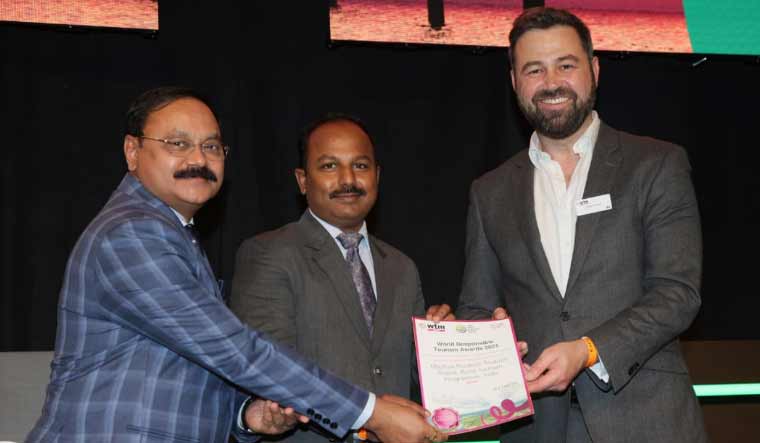 Two interesting projects of the Madhya Pradesh Tourism Board—one on rural tourism and another on safe tourism for women—won three international accolades at the World Travel Market (WTM) Responsible Tourism Awards 2021 held in London between November 1-3.

Overall India won 17 awards during the ceremony in five categories. Of these, MP Tourism won three—including the zonal gold and the coveted global award in the "destinations building back better post-COVID" category for its rural tourism project and the "one to watch" award in the 'increasing diversity in tourism' category for its safe tourism destinations for women project.

For the WTM Responsible Tourism Awards, the countries across the globe are divided into four zones. Gold awards are presented at the zonal level (India, Australia, Europe, Middle East). The best among gold award winners are then selected for the 'Global awards'

Managing director of MP Tourism Board, S. Vishwanathan and deputy director (programme and market) Yuvraj Padole received the award at the ceremony in London. The WTM appreciated the efforts of Madhya Pradesh in the tourism sector and expressed hope that the projects will lead to socio-economic transformation in future, an MP government note said.

Reacting to the achievement, Sheo Shekhar Shukla, principal secretary of the MP tourism and culture department, said that getting international awards was a matter of pride for the country and the state, adding that under the Shivraj Singh Chouhan government, his department was making efforts to develop rural tourism in a better way in the state.

Vishwanathan said that the rural tourism project will be implemented in 100 villages that would be developed as tourism villages. The local community will be involved in tourism activities including high-class lodging and boarding facilities, local food, folk music and cultural activities, rural sports, local art and crafts and skill development in the youth. This will not only give new experiences to tourists but also benefit the local community.

The "safe tourism destinations for women" project involves increasing the number of women working in tourism-related sectors, in addition to infrastructure development for women tourists, capacity building of local beneficiaries, setting up community-based organisations, self-defence training for women and creating a safe environment for women tourists with help of the local community, the managing director said.