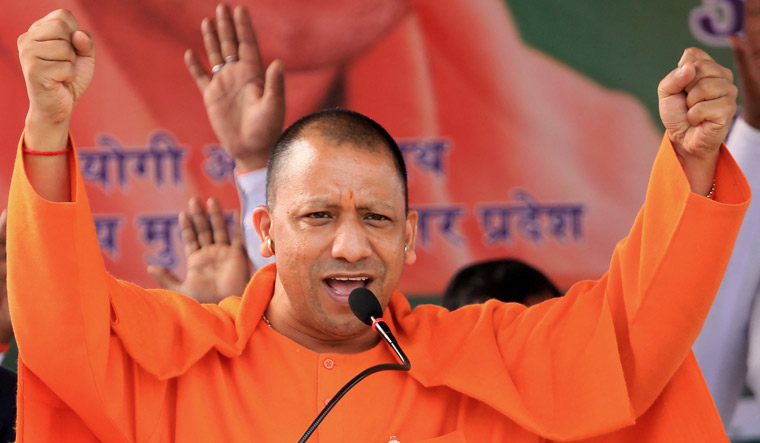 The idea of Ramrajya has taken its roots in Vantangia villages in Uttar Pradesh, Chief Minister Yogi Adityanath said on Thursday.

The chief minister made the remark while inaugurating several completed developmental works and laying foundation stones for several others in a Vantangiya tribes' forest village Tinkonia Jungle-3 in Gorakhpur.

Adityanath, who has been celebrating Diwali for the last 25 years with the Vantangia community people, also honoured many senior citizens of the community.

Originally brought from Myanmar for afforestation activities during the British period, the Vantangiya community people have been living in forest villages since then without any modern development owing to their villages lacking the revenue village status that makes them eligible for various government welfare schemes.

After becoming UP chief minister in 2017, Adityanath, however, has granted revenue village status to many Vantangia people, including at least 18 in Maharajganj district and five each in Gonda and Gorakhpur districts and has unleashed a slew of welfare schemes for them.

The schemes which were a dream for the Vantangia villagers are now a reality as they are easily getting its benefits. After 70 years of independence, these villagers did not have the voting rights and were also deprived of the basic amenities of life, lamented Adityanath while addressing the community people in their village.

But after 2017, a new chapter in their lives has started and now everyone has a pucca house, toilet, power supply, LPG gas connection, potable water supply, besides ration card, Ayushman health card and approval letter to do farming, Yogi said while speaking on the occasion.

"The idea of Ram Rajya has taken shape in Vantangia village," he said.

The chief minister also took a tour of the village after lighting earthen lamps and starting Deepotsav there.

He also inspected various facilities in smart classes for children in the village school there and asked students not to hesitate in putting questions to their teachers.

You (Vantangia people) are no more victims of harassment by police or forest officials, Yogi told the community members while asking them to protect forests and take a resolve not to make or drink wine or liquor.

He also appealed to them to send their children to schools.

The government is giving free education to girls and also providing free tablets and smartphones to both undergraduate and postgraduate students so that they can continue online classes without any difficulty, he said.

Keeping in view the effect of escalating fuel prices in the country, PM Modi lowered excise duty and the price of diesel has come down by Rs 10 and petrol by Rs 5, he said.

And the state government has further lowered the price of both these fuels. It will check inflation and benefit farmers and youth, he added.

The CM appealed to the people to celebrate Diwali with the poor and needy and said a deepak' (earthen lamp) is not only a device of light but a symbol of knowledge, prosperity and happiness.

"And to bring happiness to everyone's life, Deepotsav in Ayodhya is celebrated with lakhs of people," he said.