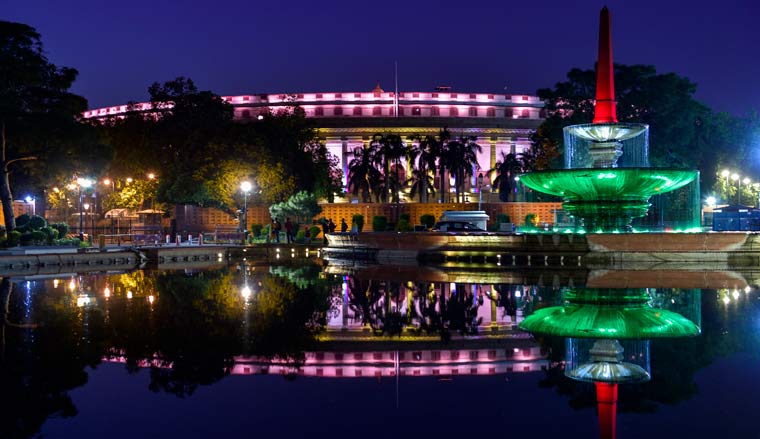 As the cumulative vaccine doses administered in India surpassed the 100-crore mark, Union Health Minister Mansukh Mandaviya on Thursday launched a song and a film describing the efforts that went behind the launch of the world's largest Covid inoculation programme.

The Union health minister launched the song and the film at the iconic Red Fort where the country's largest khadi tricolour, weighing around 1,400 kg, has been displayed.

The same tricolour (225 feet by 150 feet) was unfurled on Gandhi Jayanti at Leh.

The three-minute long song has been sung by singer Kailash Kher.

The audio-visual film is about how the entire process of vaccination was initiated and what efforts it took to launch the world's largest Covid inoculation programme.

The film also thanks doctors, nurses and everyone else who contributed in the largest vaccination drive and made it a success.

The flag was displayed at a raised slant platform at the lawn right in front of the ramparts of the Red Fort.

People were seen taking selfies in front of the gigantic tricolour and also with posters of Prime Minister Narendra Modi installed at the venue.

"I have never seen such a big tricolour. I had seen it on TV when it was unfurled in Leh. Administering 100 crore vaccine doses in such just nine months is really commendable," Nimish Jain, a resident of Chandni Chowk, said while taking a selfie with the gigantic national flag.

Union Minister Mandaviya and other officials present there also got themselves clicked with the largest tricolour in the backdrop.

A big stage, a large screen and loud speakers were set up to play the newly launched song and a short video film on the world's largest vaccination programme.

The big screen also displayed data of vaccination from January 16, 2021 when the inoculation programme was started to October 21.

Neeraj Kumar Sahu, a resident of Pratapgarh and a YouTuber, said he felt proud to know that the country has achieved success in administering 100 crore vaccines.

"It's good to know that my country is the one that has become a nation to administer fastest 100 crore doses of coronavirus vaccine. Now the world will not doubt our capabilities in medical and research field," he said.

Vinod Kumar, a resident of Bagapat, said, "I am elated to know that India has achieved this feat. It is a proud moment for me.

The security was beefed up near Red Fort to avert any untoward incident. CISF Jawans were also deployed along with police.

Over 75 per cent of India's adult population has received at least one dose of COVID-19 vaccine, while over 31 percent have been administered both the doses, according to Union health ministry officials.

To mark the milestone on the COVID-19 vaccination exercise, a series of events have also been lined up.

The Archaeological Survey of India will light up 100 of its heritage monuments in colours of the national flag to mark the milestone which will be a tribute to health professionals, frontline workers, scientists, vaccine manufacturers and the citizens of the country who bravely fought the pandemic, officials said on Thursday.

SpiceJet will unveil a special livery at the Delhi airport to celebrate the 100 crore vaccine milestone on Thursday.

"After 100 crore doses are administered, we will go on a mission mode to ensure that those who have taken their first dose take their second dose too to ensure they are protected against COVID-19," Mandaviya had earlier said.