Breaking with tradition, Dhankhar gave the oath instead of the house speaker 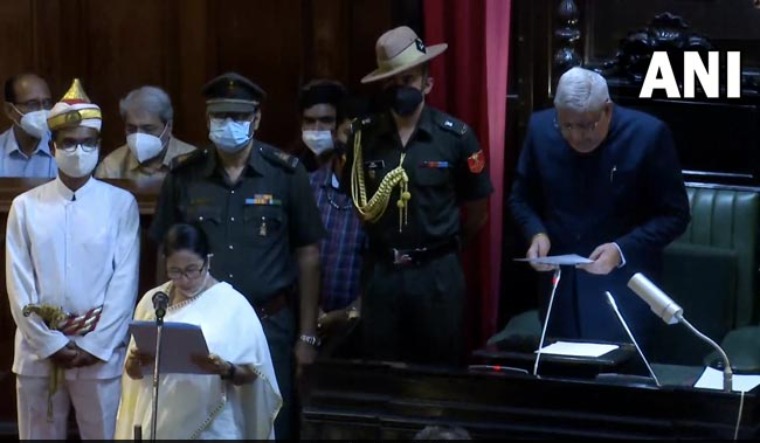 When a special West Bengal assembly session was held in 2019 to commemorate 75 years of its existence, newly elected governor Jagdeep Dhankhar was scheduled as the fifth speaker of the day. Protocol, though, allows him to speak first, even ahead of the chief minister and speaker of the assembly. But, the former governor, the chief justice of the Calcutta High Court, and former chief election commissioners preceded him at the session.

Two years on, the tables have turned. The West Bengal governor invoked Article 188 of the Indian Constitution and gave the oath to the three newly elected members of the assembly, including Chief Minister Mamata Banerjee, who had just won from the Bhabanipur seat by a margin of over 58,000 votes.

Political observers say that Dhankhar paid back Speaker Biman Bandyopadhyay in his own coin. Dhankhar’s decision was a reminder to the speaker that the oath he gives to MLAs is always at the request of the governor. And, the governor could withdraw the speaker’s right at any time.

The issue has not gone down well with the speaker, and Mamata Banerjee did not intervene. But this could be a rare moment in the history of Indian legislature. No senior Constitution expert could recollect it happening anywhere else in India.

“The speaker gives oath as a representative of the president of India or governor. But the governor taking up the responsibility on his own shows some desperation and, of course, deviation from the tradition,” said a former advocate general in Bengal.

“There is nothing wrong in it as the rules allow him to do that. But the tradition has been broken and the speaker's office has been reminded of its limitation.”

Dhankhar’s snub is a response to Speaker Bandyopadhyay flexing his authority of late. Last year, he complained to President Ram Nath Kovind and Lok Sabha Speaker Om Birla of the governor's direct intervention in the proceedings of the house.

He also publicly criticized Dhankhar for holding several bills of the house in the previous assembly. Those bills had to be reintroduced before the new assembly.

Bandyopadhyay also recently summoned Enforcement Directorate and CBI officials as they had filed chargesheets against state ministers in the Narada and chit fund cases without giving him any prior information. Both agencies wrote to the speaker that they were not bound to take his permission before filing chargesheets against the alleged offenders.

However, officers met the speaker after being summoned to produce the documents.

The tussle between the speaker and governor has reached a new flashpoint with today’s event.

Sources said the chief minister decided against opposing the governor at this stage, as she would have to fight other battles against many national parties to gain prominence in Delhi.

The parties that oppose her—primarily the communists and the Congress—have hinted at a tacit understanding between Banerjee and the Union government.

Whatever critics say, Dhankhar has begun another battle. This time, against the speaker of the West Bengal assembly, who is in his third stint as speaker.