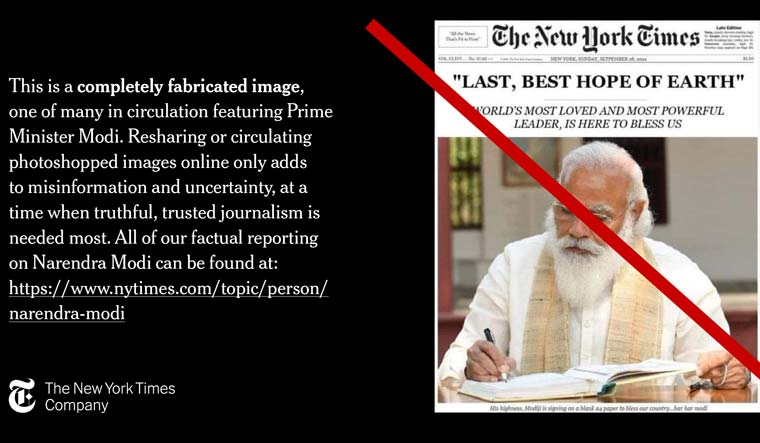 Over the past weekend, an image went viral on multiple social media platforms of what looked like the front page of The New York Times. The image showed a large photograph of Prime Minister Narendra Modi along with the headline “Last, Best Hope of Earth” and a strap line saying, “World’s most loved and most powerful leader is here to bless us."

The date of the purported issue was "Setpember 26, 2021". The image appeared timed to coincide with Modi's trip to the US over the weekend.

Soon, fact-checking websites and social media users started pointing out that the image was fake. They noted both the headline and strap line were in all capital letters, which is not the style of The New York Times. The spelling of September was also pointed out as wrong.

However, multiple Twitter users, including those with verified handles, posted the image. Early on Wednesday, The New York Times itself took note of the image to call it "completely fabricated".

The Twitter handle of the communications wing of The New York Times tweeted "This is a completely fabricated image, one of the many in circulation featuring Prime Minister Modi. Resharing or circulating photoshopped images online only adds to misinformation and uncertainty, at a time when truthful, trusted journalism is needed...” The New York Times also shared a link to the tag for Modi to list stories referring to him.

The New York Times has been criticised by supporters of Modi for its often critical coverage of the BJP-led government, particularly in the wake of the second wave of COVID-19.