Soumya, killed by Hamas in Israel, gets caught into Kerala 'love jihad' controversy 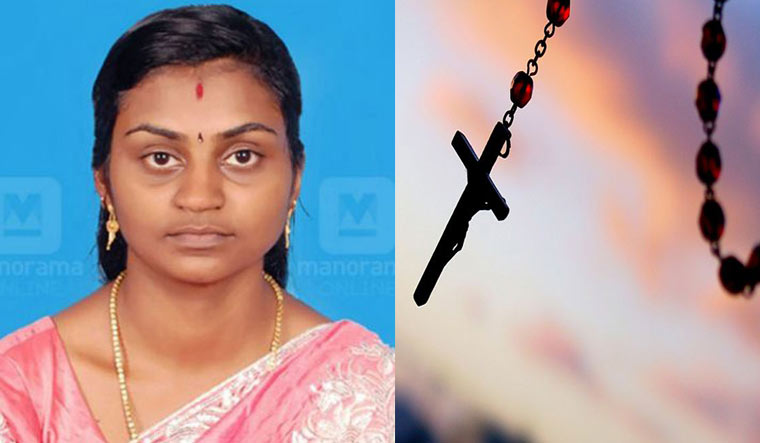 The ongoing 'love jihad' row in Kerala—which has seen a few Catholic bishops accusing other communities of luring away women from their community—took a new low as Soumya Santhosh, a Keralite who got killed in Israel in a rocket attack, too got dragged into the controversy.

Soumya was working as a home nurse in Israel when the house she was staying in got hit with a rocket attack by Hamas. She died on May 11.

Soumya's name was dragged into the controversy by SNDP leader Vellapally Natesan as a counter to the allegation by Catholic priest Roy Kannanchira that Ezhava boys are trapping Catholic girls into marriage. The priest had made this statement while handling a virtual class for catechism teachers of a Syro Malabar Church diocese. His statement got recorded and leaked. It had created a huge controversy in the state.

The SNDP leader came out in the open against the priest's remark and alleged that it was Christian men who are trapping Ezhava girls in 'love jihad'. To prove his point, Natesan cited Soumya's name and said the Ezhava woman was lured into marrying a Christian and that she had to get converted into Christianity.

Her husband, Santhosh, on Thursday countered Natesan's allegation. “We were in love from the age of 15. We waited for five years and got married when she turned 20. There was no jihad, only love between us,'' he said.

He also said that her parents were fully supportive of their marriage.

Santhosh said that his sister has married a Hindu. “Is that too a love jihad?,'' he asked.

“My Soumya is no more...Why drag her into this controversy?,'' he asked, adding that he was planning to take legal measures against this.

The 'love jihad' row had been smouldering in the state for quite a few years with the Muslim community almost always at one side of the controversy. It had started with the controversial marriage of Akhila/Hadiya to a Muslim man and it was furthered by the case of Nimisha and Merrin who got converted into Islam and joined the ISIS.

Despite the Union government's statement in the Lok Sabha that it could not find any instances of 'love jihad' in Kerala, rumours and controversies never died down.

The issue took a new turn with the Catholic priest dragging the powerful Ezhava community, too, into controversy. Though the bishop apologised and withdrew his statement, it is unlikely that the tremors and mistrust that the love jihad controversy has created will vanish soon.