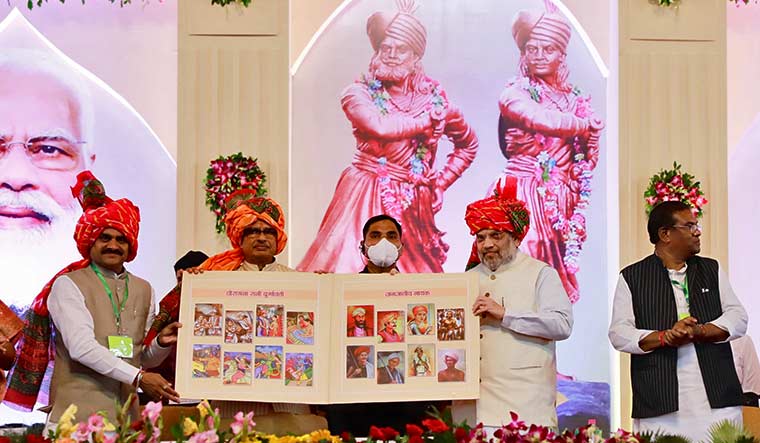 In a major push to the attempts of the Madhya Pradesh BJP to woo back tribal votes in its favour, union home minister Amit Shah attended a programme in Jabalpur to pay homage to local tribal heroes Shankar Shah and Raghunath Shah, who were martyred during the 1857 rebellion against the British on September 18.

While Amit Shah spelt out the steps taken by the Narendra Modi-led union government towards the welfare of tribal people and to honour the martyrs who were pushed to the background by the earlier Congress regime, chief minister Shivraj Singh Chouhan made a string of announcements in favour of tribal communities on the occasion. Shah also laid the foundation stone of the Shourya Smarak to be erected in memory of the tribal martyrs' son and father on occasion.

Shah announced that one of the nine tribal museums planned across the country would be set up in Chhindwara and emphasized that the tribal welfare annual budget had been increased to Rs 7,900 crores under PM Modi, from Rs 4,200 crores during the regime of the Congress-led UPA government.

Chouhan announced the implementation of the Panchayat Extension to Scheduled Areas (PESA) Act--which allows for local self-governance all across the state. The state is yet to frame the rules for the 1996 Act, thus preventing its effective implementation.

Chouhan also announced that free ration will be provided at doorsteps in all 79 tribal blocks of the state. A Rs 5 crore-worth museum will be set up at the place where Shankar Shah and Raghunath Shah were held captive by the British and Chhindwara University will be named after Shankar Shah. The CM also made several other announcements regarding tendu leaves collection and facilities and schemes for tribal students.

Previous elections have shown that the results in the tribal seats have turned the tide of the election. The BJP had won as many as 37 of the 41 tribal seats in the state and during the 2008 and 2013 polls when the number of tribal seats went up to 47, they managed to retain close to 30 seats. But the tide turned in 2018 when Congress bagged 31 of the 47 seats and the BJP managed only 16 and fell short of a majority by just seven seats.

Both the parties, therefore, understand the importance and therefore lately efforts have been started by both parties to woo the tribal communities.

Earlier this month Congress held an ‘Adiwasi Adhikar Rally’ at Barwani to protest the atrocities against tribal people and the decision of the BJP government to revoke the public holiday on World Tribal Day.

The Congress has become quite vocal on the incidents of violence against tribal people and rakes up each such incident vehemently. On Saturday too, ex-chief minister and MP Congress chief Kamal Nath tweeted to say that it was expected that during the Jabalpur programme, the BJP would apologise for making Madhya Pradesh the state with the highest cases of atrocities against tribal people according to the latest National Crime Records Bureau (NCRB) report and for the heinous incidents in Nemawar, Khargone, Neemuch, Balaghat and Dabra. “But expectedly BJP just made false promises and gave false consolation to the tribal people. They remember the tribal people only during elections, but the people have seen through their attempt,” Nath tweeted.

Meanwhile, ex-CM and Rajya Sabha member Digvijaya Singh and tribal MLAs like Kantilal Bhuria, Omkar Singh Markam and others also reached the memorial of Shankar Shah-Raghunath Shah to pay homage after Amit Shah had left. They criticized the government for keeping the 10 tribal organizations that organize the memorial programme every year, away from the Amit Shah event.

Forest minister not allowed inside memorial

The BJP event in Jabalpur registered a sour note as the state forest minister Vijay Shah, a tribal himself, was not allowed inside the memorial to pay homage to Shankar Shah and Raghunath Shah as the venue was secured for the arrival of Amit Shah and other dignitaries. Vijay Shah was seen getting angry and arguing with the police and administrative officials, spelling out that he too was a Gond tribe member and descendant of Rani Durgavati. However, he was forced to go away from outside the memorial after offering a distant homage.

The Congress took a dig at the forest minister and the BJP, saying that this was the actual face of the BJP and it constantly insulted local tribal leaders. Digvijaya Singh said that Vijay Shah had two options – either to resign or to join the campaign of getting the CM removed.

Meanwhile, Amit Shah also attended a programme to launch the ‘Ujjawala 2.0’ scheme as part of his Jabalpur visit. During the programme, domestic gas connections were issued to 5 lakh women in the state. He said that it was PM Modi who took care of the mothers and sisters who were forced to use firewood for cooking and now 9 crore households have domestic gas connections.

Shah also attended a booth members’ meeting of the BJP later in the day. Speaking on the occasion, the home minister reminisced that one time he was also a booth worker and would distribute election leaflets. He said that BJP was one party where the worker from the lowest level could reach the highest post. He urged the workers to keep on working with all sincerity and they would not require any support from anyone to rise through the ranks.