'A marathon, not a race': How India ramped up vaccine production to hit 1 crore shots a day 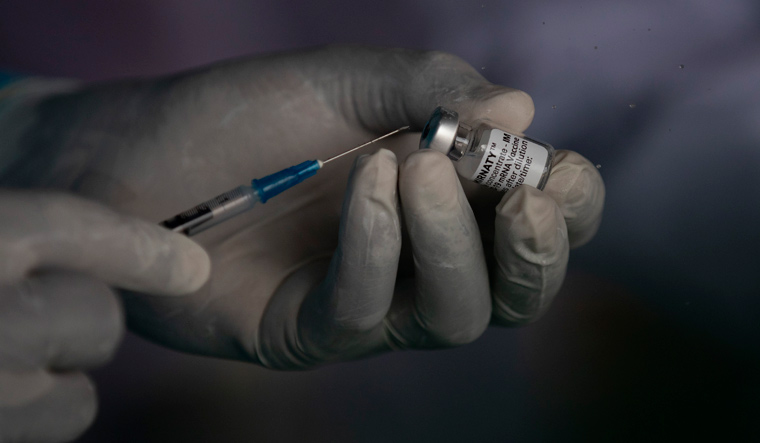 It is a marathon, not a race. Lav Agarwal, joint secretary, health, has often used ths line to describe India's vaccination mission. Slow and steady, he said, was how India was ramping up its capacities towards the ultimate objective of complete adult immunisation against COVID-19.

On Friday, India notched an important mark in this marathon as it completed over one crore vaccinations in a single day. All evening, officials and journalists had their eyes glued to the Union health ministry's dashboard as figures kept coming from various states and the numbers rose steadily. At 9.54pm, the update was 99,79,103 doses. Almost there, but not quite. But, only a few minutes later, India had breached the one crore bar too. Health Minister Mansukh Mandaviya immediately tweeted that it was the sabka prayas (from the Modi slogan sabka saath, sabka vishwas, sabka prayas), which made it possible to cross the one crore-in-a-day vaccination mark. He congratulated the healthcare workers for this feat, and noted that it was a result of Prime Minister Narendra Nodi's untiring determination. A few minutes later, Modi, too, tweeted on the record numbers, giving kudos to all those getting vaccinated and all those making the vaccination drive a success.

India's vaccination programme began with more promise than capacity in January, when the government thought it could meet domestic and international demands at the same time, and notch some diplomatic points. Capacity then was commensurate with demand. In fact, the problem initially was vaccine wastage. However, the second wave turned tables, and local demand shot up beyond what manufacturers could produce. India brought to a halt its vaccine maitri and focussed instead on ramping up production, giving sops to the two major manufacturers, Serum Institute of India and Bharat Biotech, who were producing Covishield and Covaxin respectively. Several other plants were readied for manufacturing Covaxin, not an easy task because vaccine production needs manufacturing units with high levels of biohazard containment (biosafety level 3) measures in place. Apart from Hyderabad, the vaccine is now being produced in units in Karnataka and Gujarat also.

The experience of the second wave made it abundantly clear that the way forward was vaccination, and the efforts for this were multifold. Vaccines needed to be available. The process needed to be smooth to ensure no wastage. People needed to be convinced to take the shots. On June 21, the day universal adult vaccination began, India administered 86.16 lakh doses. The tempo was not expected to sustain on a daily basis for various reasons. People choose vaccination days depending on approaching festivals and holidays. On certain days, there are more people queuing up; on some others, there are short lines. Vaccine availability, too, needed to be sustained.

Over the weeks, as the government moved away from making tall claims and focussed on consolidating its plus points and addressing the lacunae, the results began to show. Complaints of vaccine shortages began reducing, and over the last few days, India has sustained administering over 60 lakh doses a day. As of today, there is a buffer of over 4.20 crore vaccines with the states, with another 1.51 crore doses in the pipeline, according to the ministry.

The mainstay of the vaccination drive still are Covishield and Covaxin, and the Russian Sputnik V is available in modest quantities. Three other vaccines—Moderna, Johnson and Johnson and ZyCov-D—has also got emergency use authorisation, but haven't reached consumers yet. Ministry officials say this is a matter for the manufacturers and suppliers to deal with. In any case, the unavailability of those vaccines haven't hit the ongoing programme, except in not giving enough choice to consumers.

From September, the focus has to be on complete vaccination, even as the threat of a third wave loomed. While half the adult population of the country has received vaccination, only 15 per cent of them have actually got both shots. The stress, therefore, has to be on sustaining the momentum. This momentum needs deadlines but shouldn't be oriented towards unrealistic targets of "everyone vaccinated before the new year". For then, the pressure to play with figures becomes immense. The Centre has already asked the state to focus on the second shots for people, a single shot is only partial protection, as multiple studies have shown.

India has almost reopened, with the exception of educational institutions. Modi has stressed on vaccinating teachers and educational staff, and this is a priority if we want our children back in school. A year and half of sitting at home has impacted the quality of education being imparted. Since the vaccines for under 18 are not approved, school reopening hinges on ensuring that the entire support staff of a school—from bus drivers to peons to teachers—are vaccinated. A similar focus should also be on colleges, where most students, too, are eligible for vaccination. In fact, colleges could open even earlier if there is a concerted effort at vaccinating everyone involved there.

Apart from keeping the pace in vaccination, India also needs to work at getting its vaccines recognised across the world. While some countries have recognised the CoWin certificate, Indians still have to undergo quarantine in most countries, especially if they have taken Covaxin. There are a lot more vaccines in the pipeline, many of them indigenous. They need to be recognised by the World Health Organisation. Before international travel resumes completely, this homework needs to be done. Soumya Swaminathan, chief scientist at WHO, tweeted her congratulations to India. She wrote: "India achieves 50 per cent coverage (at least one dose) of adult population ->620 million doses administered, 10 million in the past day! Congratulations to the thousands of personnel involved. Vaccination, along with public health and individual preventive measures will protect everyone."

Recognising these vaccines internationally is as important.