India, the US, Australia and Japan will carry out the high-voltage naval exercise 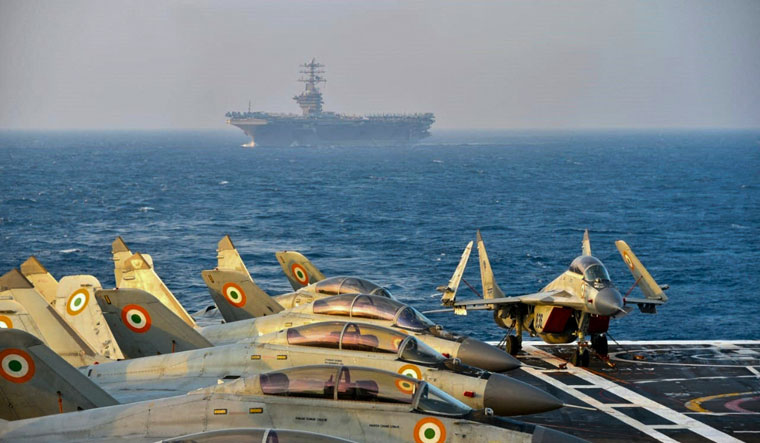 (FILE) This handout file photo taken and released by the Indian Navy on November 18, 2020 shows Indian army fighter jets on the deck on an aircraft carrier during the second phase of the Malabar naval exercise in the Arabian sea | AFP

The Quad countries -- India, the US, Australia and Japan -- will carry out the next edition of the high-voltage Malabar naval exercise from August 26 to 29 off the coast of Guam amid mounting global concerns over China's growing military muscle-flexing in the Indo-Pacific region.

Indian stealth frigate INS Shivalik and anti-submarine warfare corvette INS Kadmatt arrived in Guam, an island territory of the US in the Western Pacific, on Saturday to take part in the exercise that will feature an array of complex drills, Indian Navy officials said on Sunday.

"Complex surface, sub-surface and air operations including live weapon firing drills, anti-surface, anti-air and anti-submarine warfare drills, and joint manoeuvres and tactical exercises will be conducted during the exercise," he said.

The Malabar exercise is taking place in the midst of growing convergence of interests in the maritime domain as well as military cooperation among the four Quad countries in the face of China's increasing assertiveness.

Though the exercise is not part of the framework of cooperation under Quad, it is increasingly seen as a reflection of increasing partnership among the four countries.

Later this year, US President Joe Biden is expected to hold an in-person summit of the leaders of the Quad countries in Washington to explore ways to further expand cooperation among its member countries.

Senior officials of India and the other member nations of the Quad on August 12 held extensive talks on advancing practical cooperation in areas of infrastructure, maritime security, counter-terrorism and cybersecurity to achieve the goal of a free and open Indo-Pacific.

Commander Madhwal said the conduct of the exercises despite the coronavirus restrictions is a "testimony of synergy" among the participating navies and their commitment to safer seas.

Following India's invitation, Australia participated in the Malabar exercise last year that effectively made it a drill by all four member nations of the Quad.

China has been suspicious about the purpose of the Malabar exercise as it feels that the annual war game is an effort to contain its influence in the Indo-Pacific region.

Last year, the exercise was hosted in two phases in the Bay of Bengal and the Arabian Sea.

There have been mounting global concerns over China's growing military assertiveness in the Indo-Pacific region.

India, the US, Australia, Japan and many other like-minded countries are working towards ensuring a free, open and inclusive Indo-Pacific.

"The exercise will provide an opportunity for common-minded navies to enhance inter-operability, gain from best practices and develop a common understanding of procedures for maritime security operations," the Navy spokesperson said.