Race hots up for the post of Air Force, Navy chief. Here are the main contenders

The corridors of South Block are abuzz with names of contenders 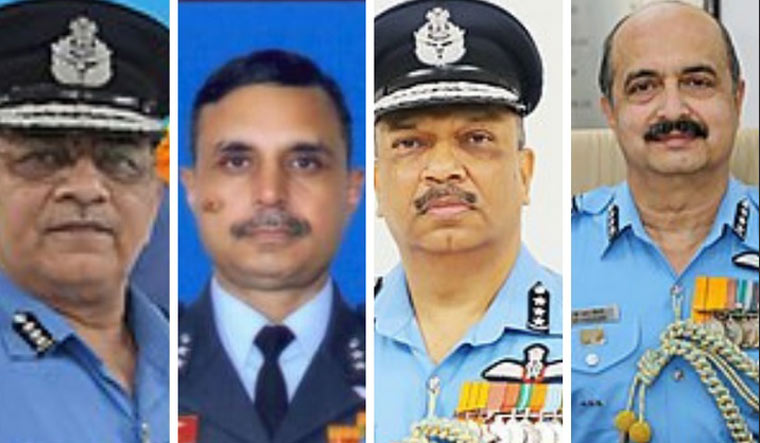 The race has begun. With the government initiating the process of selecting the next Air Force and Navy chief, the corridors of South Block in the national capital are abuzz with names of contenders.

As the Chief of Indian Air Force Air Chief Marshal R.K.S. Bhadauria is set to retire by the end of next month, the ministry of defence has shortlisted names of four senior-most air marshals for the top post.

Traditionally, the government declares the name of the succeeding chief two to three months before the superannuation of the current chief. The idea is to give sufficient time to the new person to understand and coordinate with the present chief for the continuation of the work. Soon, the ministry of defence will send these four names to the appointment committee of the cabinet.

Interestingly, the announcement of appointment of ACM Bhadauria came ten days before his retirement—he was due to retire on September 30, 2019, along with the then Air Force chief, Air Chief Marshal B.S. Dhanoa. The elevation to the post of gave ACM Bhadauria two more years in service.

Air Marshal Chaudhari, presently the vice chief of IAF, is the senior-most officer in the race. Commissioned in the fighter stream of the IAF on December 29, 1982, Air Marshal Chaudhari has a flying experience of more than 3,800 hours on a wide variety of fighter and trainer aircraft, including missions flown during Operation Meghdoot and Operation Safed Sagar. Operation Meghdoot was the code name for the Indian Armed Forces' operation to seize control of the Siachen Glacier in Kashmir in 1984, and Operation Safed Sagar was for IAF's role in the 1999 Kargil conflict.

Next in line is Air Marshal Amit Dev, who is the Air Officer Commanding-in-Chief of Shillong- based Eastern Air Command. As a fighter pilot, he has flying experience of over 2,500 hours on a variety of fighter aircraft including MiG-21 and MiG-27. Over the course of a vast career of 38 years, he has commanded a fighter aircraft squadron, air defense direction centre and an operational fighter base. Recently, he has taken a sortie in the Rafale fighter jet while the induction of the fighter jet at its second squadron at Hasimara airbase in West Bengal.

The Chief of Thiruvananthapuram-based Southern Air Command, Air Marshal Manavendra Singh is a helicopter pilot, with over 6,600 hours of flying experience in various sectors like the Siachen, the Northeast, Uttarakhand, and the western desert.

Air Marshal Sandeep Singh, who is heading the Jodhpur-based South Western Air Command can also be considered for the top post. In his long career of 37 years, he has commanded a fighter aircraft squadron and was a project test pilot for the Su-30MKI. Due to his proficient knowledge of the Su-30MKI platform, Air Marshal Sandeep Singh has been the mainstay liaison for the implementation of various weapons and systems by DRDO. He served as the deputy chief of the air force as well.

Navy has an interesting race, as the senior-most naval officer after chief of naval staff is retiring on the same date. Vice Admiral Anil Kumar Chawla, who is heading the Southern Naval Command, is due to retire on November 30, the same day when Admiral Karambir Singh is completing his tenure. A navigation and direction specialist, Vice Admiral Chawla commanded Coast Guard Ship C-01, Vidyut class missile boat INS Vinash, Kora-class guided missile corvette INS Kora, Stealth frigate Tabar and the aircraft carrier Viraat in his service of close to four decades. Since IAF has a 'precedence' of an officer being appointed as the chief on the day of his retirement, the Navy may also be expecting the same.

Then comes Vice Admiral R. Hari Kumar, who heads the Mumbai-based Western Naval Command. He is specialised in gunnery and has commanded five ships, including a Destroyer and the aircraft carrier INS Viraat. He has held important staff appointments both ashore and afloat and has also been Naval Advisor to the Government of Seychelles.

Vice Admiral Ajendra Bahadur Singh, chief of the Vizag-based Eastern Naval Command, is the third senior-most officer to be in the race for the top post.

The 'seniority principle', which is used to be the convention for selection of chiefs in the three services, is no longer the sole criterion followed by the Centre, especially after the selection of General Bipin Rawat as the Army chief, ignoring two seniors over him, and Admiral Karambir Singh as Navy Chief over Vice Admiral Bimal Verma.

Many military personnel believe that the 'seniority principle' is the best guarantee against the politicisation of top appointments. Moreover, in the military, the line of succession has always been clear, as the prospective candidate is groomed to become the chief. However, many countries in the world do not follow the seniority principle. Military powers the United States, France, Germany, and China and even Pakistan do not follow it. However, the UK still follows the practice.