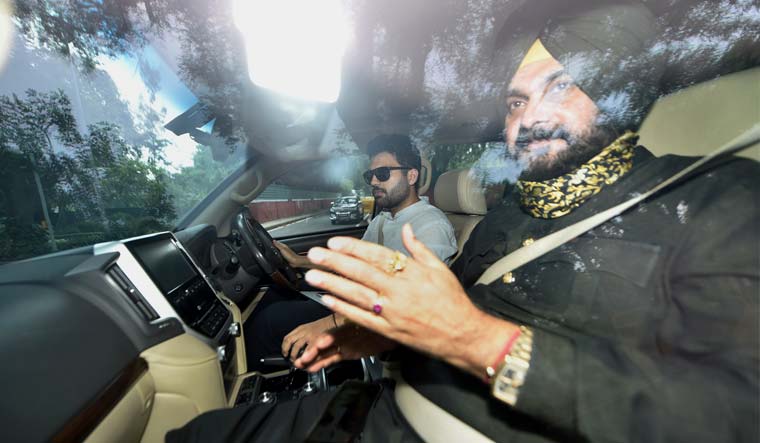 The meeting comes ahead of the party's Punjab unit revamp and amid reports that Sidhu may get a key role in the organisation, notably the post of Punjab Congress chief.

According to sources, Punjab Chief Minister Amarinder Singh has expressed his resentment over Sidhu being given a key role. AICC general secretary Rawat had, however, denied such reports.

Rawat had maintained that the central leadership was working out a peace formula where both Singh and Sidhu could work together to help the party win in the Punjab Assembly polls next year.

Both the leaders are at loggerheads with each other and have made public statements against each other.

Notably, both Singh and Sidhu have held parallel meetings in Chandigarh with their loyalists.

While the chief minister has met some party MPs, MLAs and ministers, Sidhu is learnt to have met Punjab ministers Sukhjinder Randhawa and Tript Rajinder Bajwa and some MLAs close to him at Randhawa's residence.

Amid the reports that Sidhu could be made Congress state chief in Punjab, senior party leader Manish Tewari on Friday gave details of the composition of the state's population, appearing to bat for a Hindu face for the post.

His party colleague Pawan Dewan asked the Congress about representation of the Hindu community in key posts in the state unit.

Tewari, who is an MP, in a tweet cited Punjab's demography and mentioned that Sikhs constitute 57.75 per cent of the population, while Hindus and dalits constitute 38.49 and 31.94 per cent, respectively.

"Punjab is both progressive and secular, but balancing social interest groups is key. Equality is the foundation of social justice!" he said in the tweet and tagged the Congress and the party's in-charge of Punjab affairs, Harish Rawat.

If the party chooses to appoint Sidhu as the Punjab Pradesh Congress Committee (PPCC) president, then there will be two Jat Sikhs on key posts. Punjab Chief Minister Amarinder Singh is also a Jat Sikh.

Congress leader and chairman of the Punjab Large Industrial Development Board Dewan sought to know the representation of the Hindu community in the state unit.

Recently, a section of the media reported that Sidhu was likely to be announced as the PPCC chief by the party high command.

There is also talk of appointing two working presidents: A dalit and a Hindu.