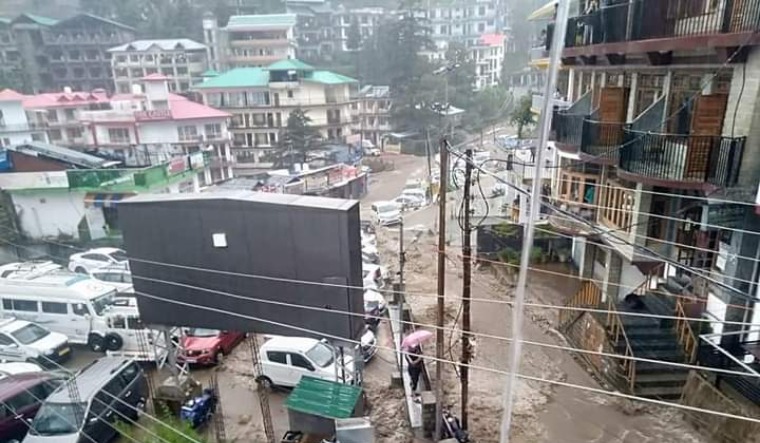 The flooding in Dharamshala | Supplied

Vehicles could be seen being washed away in the Bhagsu Nag area of Dharamshala, Himachal Pradesh, after a cloudburst early on Monday.

ANI reported that around 10 shops had been damaged due to the Manjhi rivulet flooding its banks in Dharamshala. NDTV reported, "The rapid pace at which the water was flowing transformed—in no time—a brook in Bhagsu Nag, which is a tourist attraction, into nothing short of a river. Some of the hotels in the area have reported heavy damage. The cloudburst and flash floods have instilled fear in people and also caused commotion and confusion."

More than 10 cars were washed away due to heavy overnight rain in Dharamshala, Hindustan Times reported.

Heavy rain was also reported in Kangra district, throwing life into chaos. "All rivers and rivulets in Dharamshala and Palampur besides Kullu were in spate as rain lashed the region since last night," Hindustan Times reported on Monday.

The IMD has issued an orange weather warning for possibility of very heavy rain until Tuesday.

The heavy rain has hit road transportation. The Hindustan Times reported the Rishikesh-Badrinath National Highway 07 was blocked due to debris. The bridge constructed on Gaj Khad at Rajol in Kangra district along Mandi-Pathankot national highway has been damaged, The Times of India reported. A landslide was also reported on the Mandi-Manali highway.