The hospitals seek a proper mechanism and a single-window system 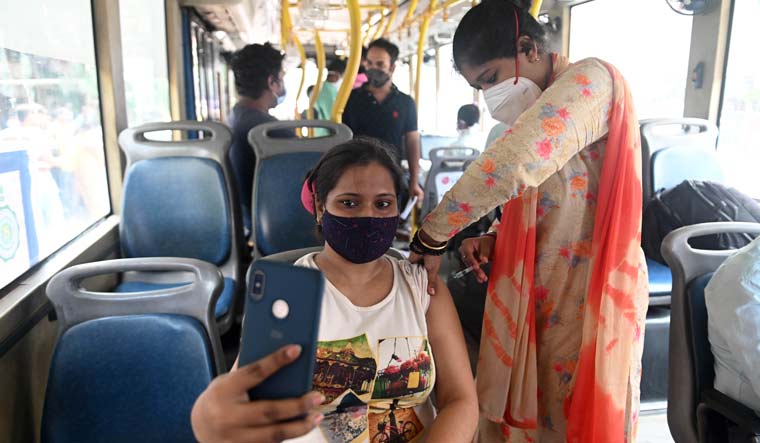 Several private hospitals across the country said they have no clarity on procuring COVID-19 vaccines under the new policy announced by Prime Minister Narendra Modi and that it has led to the vaccination being put on hold at their centres.

The hospitals have sought a proper mechanism and a single-window system to be put in place for procurement of vaccine doses. They also claimed that they had approached the vaccine manufacturers -- Bharat Biotech and Serum Institute of India (SII) -- and also state governments, but to no avail.

Meanwhile, in a recent communication to the Union health ministry, Prakash Kumar Singh, director, Government and Regulatory Affairs at SII, is learnt to have written, As per your direction, we are not accepting any further orders/payment from any private hospital in the country. We await your further direction with regard to roadmap for future supplies to private hospitals.

Elaborating the problems faced by private hospitals, S C L Gupta, medical director, Batra Hospital said, "The problem is that there is no clarity on how we will be procuring the vaccines. When we ask the state government officials, they say wait till June 21 stating that the policy is not yet clear.

The central government also has asked us to wait. We have approached the companies too, but they are also not clear on the methodology of procurement, he said.

In the whole process, Gupta said, vaccination of people is getting delayed.

"With fear of a possible third wave hitting India, we want to vaccinate as many people as possible. Also several people and many of our healthcare workers who have taken the first dose are waiting for their second dose," he said.

P K Bhardwaj, Chief Executive Director and Head of Department of Surgery, Saroj Hospital also said that nothing has been clearly spelt about procurement by private hospitals and how much vaccines will be given to each private hospital.

The vaccinations at most of the private hospitals are on hold and the public, especially those patients who need to get the second doses, are at the receiving end.

"The government should soon come out with transparent and clear guidelines so as to avoid any further delay in this crucial exercise of inoculating people against the deadly virus," Bhardwaj, who is also secretary of the Delhi Voluntary Hospital Forum, said.

Sarvesh Saran Joshi, president, Rajasthan Doctors' Association and also managing director of Shekhawati Hospital, Jaipur said, "We have spoken to manufacturers of both Covishield and Covaxin and they said the government has asked them not to supply the vaccines directly to private hospitals. So, the majority of medium to small hospitals are suffering the most."

Jitendra Saraf, director, Sita Memorial Multispeciality Dental Clinic, Raipur said when he approached the state government officials, they said they are yet to receive proper guidelines on how private hospitals would be procuring the jabs.

"We have been writing to both Bharat Biotech and Serum Institute, but there is no response from them," Saraf, also a member of the Indian Dental Association, said.

Some of the private hospitals also flagged the service charge for vaccination being capped at Rs 150, saying it may not be feasible for them to to organise sessions outside their own centres at that rate.

"At a service charge of  Rs 150, we can provide vaccination only at our centre. We had started to go to RWAs and private sector companies, but now organising such sessions at this rate will not be possible. Capping the price at Rs 150 will also impact the entire vaccination drive. So a mechanism needs to be worked for this too, Gupta said.

Organising outside camps requires additional resources and manpower, and holding such sessions at Rs 150 is not feasible, another private hospital said.

Under the revised guidelines which will come into effect from June 21, the Centre will procure 75 per cent of the COVID-19 vaccines being produced by manufacturers.

Domestic vaccine manufacturers are given the option to also provide jabs directly to private hospitals which would be restricted to 25 per cent of their monthly production.

Based on this aggregated demand, the central government will facilitate supply of vaccines to private hospitals and their payment through the National Health Authority's electronic platform.