‘Is this the system people of Antigua, Dominica and India want to live under?’ 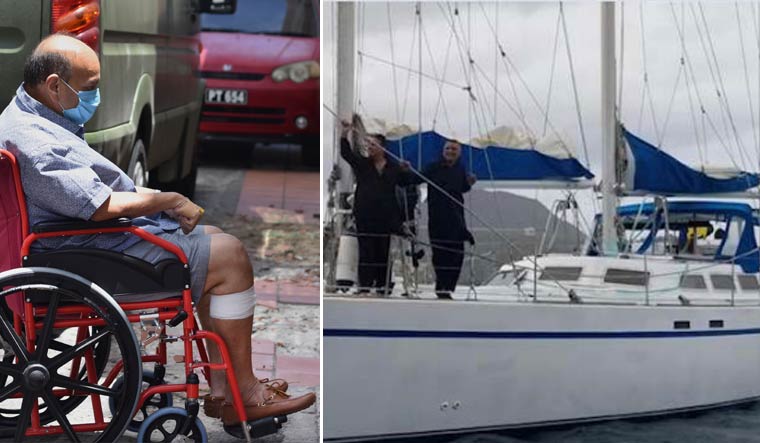 Lawyers representing fugitive businessman Mehul Choksi, whose dramatic arrest in Dominica sparked concerns that he was tortured and illegally abducted from Antigua, said they have approached the UK Metropolitan police to investigate the matter.

Choksi, who has been living in Antigua ever since he fled India in 2018 following a case concerning his alleged role in the Punjab National Bank scam, went missing from the island country on May 23. On May 25 he surfaced in Dominica, appearing visibly bruised, at which point his lawyers said he had been forced onto a boat by policemen who appeared Antiguan and Indian.

His lawyer Michael Polak said Choksi was removed from Antigua and Barbuda, where as a citizen he enjoys rights to approach the British Privy Council as last resort in cases on his citizenship and extradition, to Dominica where these rights are not available to him.

He said English courts and British Police have "universal jurisdiction" to probe such cases wherever they take place. Polak said Metropolitan police has said that they would send an investigator to see what has happened.

The lawyers added that his case could be a “fundamental test” for the legal systems of the island nations.

“This is a fundamental test for the legal systems of Dominica and Antigua and Barbuda, as well as a political test for [the Caribbean Community] and the Commonwealth as to whether there is respect for the rule of law and individual rights. Should states be able to bypass the proper legal processes by kidnapping someone and removing them from a place where they have outstanding litigation to determine questions of their nationality and rights?” asked the lawyers at a press interaction.

“If we allow this to happen we move away from a system of law to a system of brute force, where the most powerful states decide on individual’s disputes without any recourse to legality or due process. Is this the kind of system that the people of Antigua, Dominica, and India want to live under?” they asked.

While the Antiguan Prime Minister had stated that Choksi went to Dominica in a bid to have a romantic getaway with his girlfriend, Choksi’s lawyers say a woman named Barbara Jarabik “lured” him to the spot where he was “attacked and kidnapped in May”.

They say Choksi was taken to an AirBnB that was rented by Barbara, showing screenshots of conversations with the AirBnB owner where Barbara can be seen asking the owner if she could dock a small boat at the property.

The lawyers allege that the two men who allegedly attempted to kidnap Choksi performed a “dress rehearsal” the previous day but and tried to enter Dominica by ship but were prevented from doing so.

India to make all efforts to bring fugitives to justice: MEA

India, in turn, has been keen on obtaining Choksi’s extradition. An Interpol Red Notice has been out on the businessman since 2018.

According to investigating agencies, Nirav Modi and his uncle Mehul Choksi, in connivance with certain bank officials, allegedly cheated the PNB of Rs 14,000 crore through the issuance of fraudulent Letters of Undertaking (LoUs).

At a media briefing on Thursday, MEA Spokesperson Arindam Bagchi said the issue of economic offenders was discussed during the UK-India talks last month, and the British side had conveyed that there are some legal hurdles because of the nature of the criminal justice system in that country, but they will do whatever possible to make sure that such people are extradited at the earliest.

New Delhi has been seeking the extradition of Indian fugitives Vijay Mallya and Nirav Modi from the UK to face trial in India.

Asked about Choksi at the online media briefing, Bagchi said, "As regards Mehul Choksi, I don't have any particular update this week. He remains in custody of Dominican authorities and certain legal proceedings are underway."

He said India will continue to make all efforts to bring fugitives to face justice in India.

Choksi next faces a bail hearing on June 11.