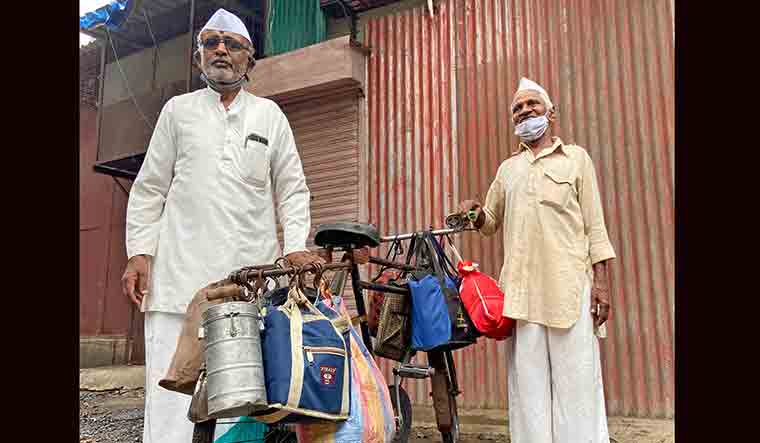 It is 11 in the morning and 68-year-old Yamnaji Ghule is readying himself for his daily routine. Having picked up tiffins from various homes in and around Dadar (in central Mumbai), Ghule has stacked them up neatly on his bicycle and is all set to go for tiffin deliveries. A few minutes ago, his colleagues had celebrated his birthday by cutting a small cake and Ghule is accepting wishes from those around him.

“I came to Mumbai in 1969. Initially I looked for a job but did not t find any. So, I began delivering tiffin. A relative of mine was already working as a Dabbawala in Mumbai. I got the break with his help,” Ghule, a former president of Mumbai Tiffin Box Suppliers Association, told THE WEEK.

In his service spanning more than five decades, Ghule worked tirelessly. Nothing stopped him, not the flash flooding of the city during the monsoons nor the terrorist attacks that the city has braved. “But our work came to a complete halt last year due to Covid-19 outbreak and the subsequent lockdown. I had not seen anything like this in over 50 years that I have been delivering tiffins,” said Ghule.

As a result of lockdown in 2020 most of the 5,000 Dabbawalas returned to their native villages in interiors of Maharashtra. Initially they had thought that they would soon be back at work in a month or so. But that did not happen. “I spent eight months at my village in Khed taluk of Pune district and returned only in January and started work again hoping that things will improve. But now the second wave has struck and we are affected yet again,” Ghule said.

Ghule used to earn around Rs 20,000 per month before lockdown. Now his earnings are just about Rs 7,000 per month as he is supplying tiffins only to essential workers who have been allowed to attend offices and doctors at city hospitals. Thankfully both his sons are post graduates. The elder one is working and the younger one is preparing for the state public service commission competitive exams. So, Ghule senior is the not the only breadwinner in his family.

But that is not the case with many Dabbawalas. “With tiffin supply services disrupted, many of our brethren have taken up whatever jobs they could get. Some are security guards, some are working at kirana shops, some have become drivers and delivery boys. This pandemic has taken away our source of income,” said Vishnu Kaldoke, a 40-year-old Dabbawala who is also spokesperson for Mumbai Tiffin Box Suppliers Association.

Kaldoke hails from Rajgurunagar in Pune district. He is a third generation Dabbawala. His father was one and so was his grandfather. Kaldoke has passed his 12th  grade from Mumbai’s famous Wilson college and can communicate in English. He started supplying tiffins at the age of 17 when he was in college and has been doing it since then.

Dabbawalas are active at 89 of Mumbai’s suburban railway stations. Each of these stations are served by one of two groups of Dabbawalas who collect tiffins every morning and deliver it at offices before lunchtime so their customers can have a healthy homemade meal. They then collect empty tiffins and then return them to respective homes by 6pm. The group at Dadar station has 68 Dabbawalas who supply 1,400 tiffins every day.

“Work from home and ban on entering societies even after opening of the lockdown has severely affected our business. We had plans to start central kitchens at three-four places in Mumbai but now everything is uncertain as we have recovered just five per cent of our total business,” said Kaldoke.

Kaldoke said that people of Mumbai were generous in helping Dabbawalas during this tough time. “We may have lost our daily earnings but with help from generous organisations we managed to get our roti (meals). So many organisations came forward to help us with food grains, educational material for our children including tablets to facilitate online schooling.”

He is, however, upset that the promise of help made by the government has not been fulfilled yet. The association had made pleas to government to help Dabbawalas. “The government agreed to pay Rs 2,000 to each Dabbawala. There are 5,000 Dabbawalas in Mumbai. But the government’s decision turned out to be mere lip service as not a single Dabbbawala has received the promised Rs 2,000,” stated Kaldoke. “Either give us permission to travel in the trains so that we can start earning again or implement the promise you made to us,” he added.