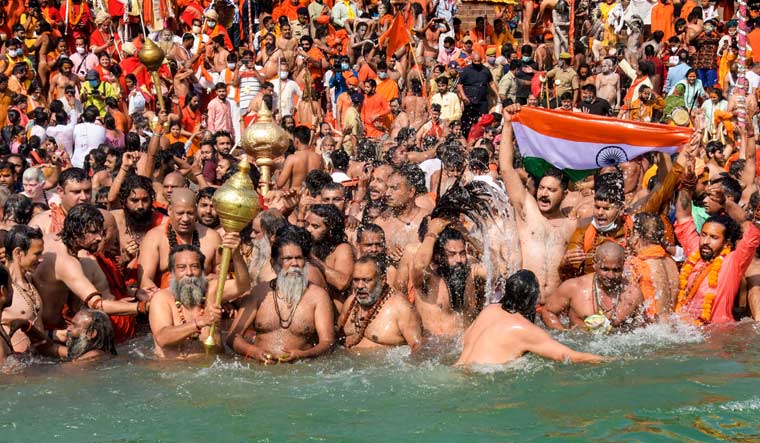 Devotees gather to offer prayers during the third 'Shahi Snan' of the Kumbh Mela 2021, at Har ki Pauri Ghat in Haridwar on April 14 | PTI

In the weeks after the Kumbh Mela took place in Haridwar, Uttarakhand, between March 31 and April 24, reports are growing that the event, which saw roughly 3.5 million devotees congregate in the small riverside town, has become the latest “super-spreader” event of the COVID-19 pandemic.

Lalit Kant, former head of the division of epidemiology and communicable diseases, Indian Council of Medical Research (ICMR) told the BBC that the huge groups of “mask-less pilgrims singing the glories of the Ganges" created an ideal environment for the virus to spread rapidly.

Kant told the British public broadcaster, "We already know that chorus singing in churches and temples are known to be super-spreader events."

However, Haridwar officials have said only 2,642 devotees have tested positive. Even so, many of these were prominent figures—with one of the top seers of the Kumbh Mela, Mahamandaleshwar Kapil Dev Das, dying of COVID-19 after being admitted to a hospital. The BBC report notes that former Nepal King Gyanendra Shah, as well as its former Queen Komal Shah, both tested positive after returning home from the state. Bollywood composer Shravan Rathod also died after his return from the Kumbh.

With over 74,000 active COVID-19 infections, Uttarakhand has the bulk of its infections in the capital region of Dehradun.

The Uttarakhand High Court on Monday pulled up the state government for continuing to allow religious events despite a surge in coronavirus cases and doubted its preparedness to deal with the pandemic, asking it to wake up from slumber.

"We cannot behave like the proverbial ostrich and bury our head in sand in the face of the pandemic," Chief Justice R.S. Chauhan and Justice Alok Kumar Verma said while hearing a PIL on the government's handling of the pandemic.

The bench asked why the state was still not prepared despite combating the pandemic for more than a year, and reminded the government about predictions of a third wave.

The court said the while the state reeled under the effect of the Kumbh Mela, the Purnagiri Mela took place attracting a crowd of 10,000 people. It asked whether the rise in coronavirus cases in Kumaon was a result of that mela.

The court questioned the state government for the confusion over the Chardham yatra, asking whether the annual pilgrimage will be allowed to become a coronavirus hotbed.

While the government says the yatra has been cancelled, the board managing the temples has issued the standard operating procedure (SOP) for the yatra, it said.

"How can we make sure that it will be followed when the same was flouted during the Kumbh Mela?" it asked, referring to the SOP.

The court directed the state government to pool all its resources in the fight against the pandemic.

"We are fighting a world war with an invisible enemy and must put in all the resources. Under Article 21 of the Constitution, it is the foremost duty of the state to preserve the life of its citizens. The government must pour every drop into it," the bench said.

On a detailed report filed by Health Secretary Amit Negi on strengthening medical facilities over the past few months, the high court said it was not enough to fight the second wave, let alone the third.

Negi submitted that 1,338 ICU beds and 892 ventilators are available in the state now. The number of oxygen concentrators has increased from 637 to 5,700.

Since March, oxygen beds have increased from 275 to 1,293 and 200 more will be available in the next 15 to 20 days. The state has 29,000 isolation beds. Two temporary hospitals are coming up within a few days, and there are 10 government and 26 private testing labs.

Negi said the Centre has allotted 75,000 Remdesivir injections to Uttarakhand. Out of them, about 25,000 have been delivered and 2,000 being made available every day.

The high court said the peak of the second wave is yet to come and these preparations were not enough.

It said the predictions of the scientific community about the second wave were ignored. "We are now paying through our noses to make up for it.

The bench said the government and the people must fight together to overcome the predicted third wave. "The Government by making necessary SOPs and infrastructure, the people by following guidelines," it added.

The court asked the government to increase testing labs, particularly in epicentres such as Haridwar, and deploy mobile testing vans in remote areas.

The bench pointed out that under Disaster Management Act, the government may altogether skip the process of inviting tenders to expedite the process.

This is necessary in the current situation as 27% of the cases are being reported from the hilly regions and many more are going unreported, the judges said. The court also asked the government to take action against private hospitals charging exorbitant fees from COVID-19 patients.

Those involved in black-marketing, hoarding and selling fake medicines must face severe punishment under the Drugs and Cosmetics Act, it said.

The judges said SOPs must be put in place to deal with the increasing biomedical waste due to pandemic.

The court directed the Government to file a supplementary affidavit specifically addressing its queries and asked the health secretary to be present at the next hearing on May 20.