In a major fallout of the comprehensive loss of party candidate Rahul Lodhi in the Damoh by-poll five days ago, the Madhya Pradesh BJP, on Friday, served a show cause notice to  former minister and senior leader Jayant Malaiya, and expelled five office bearers, including Malaiya's son Siddharth, for 'anti-party' activities.

The state president of the BJP, Vishu Dutt Sharma, took disciplinary action against the six, including the senior leader, after Lodhi lost by a margin of 17,097 votes to Congress's Ajay Tandon.

After his loss, Lodhi, a Congress turncoat who had defeated Jayant Malaiya by a margin of mere 798 votes in the 2018 assembly polls, had directly blamed Malaiya father-son duo for his loss through sabotage.

To Lodhi's post-result allegations, Jayant Malaiya had said Lodhi was naming him as part of a conspiracy and held that the people of Damoh were not against BJP but the candidate. He also said he will respond to the issue when the party asked him to.

On Friday, when THE WEEK contacted Jayant Malaiya on the show cause notice to him and expulsion of his son, the former minister said he had just then received the notice and did not want to respond immediately. “I will respond at a proper time,” Malaiya said.

The by-poll to Damoh constituency was necessitated as Lodhi resigned as Congress MLA in October 2020 to join the BJP, even as the by-poll process for 28 seats in the state were on. He was the 27th Congress MLA to have resigned since March 2020. Lodhi was then made the president of the MP State Warehousing Corporation.

During the by-poll, apart from Chief Minister Shivraj Singh Chouhan who conducted five public meetings during the campaign time, state president of BJP, Sharma, camped in Damoh for about two weeks. At least 13 ministers of the state government, Union minister Prahlad Patel (Damoh member of parliament), ex-chief minister Uma Bharti and Rajya Sabha member Jyotiraditya Scindia were among the stalwarts to consistently campaign for Lodhi as BJP candidate.

Malaiya, who had opposed Lodhi's inclusion in the BJP and giving the by-poll ticket to him was reportedly brought around by the party organisation, and his son Siddharth, the district convener of the training cell of the party, was given responsibility for urban Damoh during the by-poll. However, Lodhi lost badly in urban areas of the constituency, losing both his own home ward as well as the ward where Malaiya's family resides. He then alleged publicly about sabotage by the Malaiya family and urged the CM Shivraj Singh Chouhan and BJP president Sharma to take action.

Consequently, on Friday, the party took a decision to expel Siddharth Malaiya and zonal chiefs of four zones in Damoh–Abhilash Hajari, Santosh Rohit, Devendra Singh Rajput and Ajay Singh–from primary membership of the party. A show cause notice was served to Malaiya senior, asking him to respond with clarification in person on in written within 10 days, failing which disciplinary action will be taken against him too. 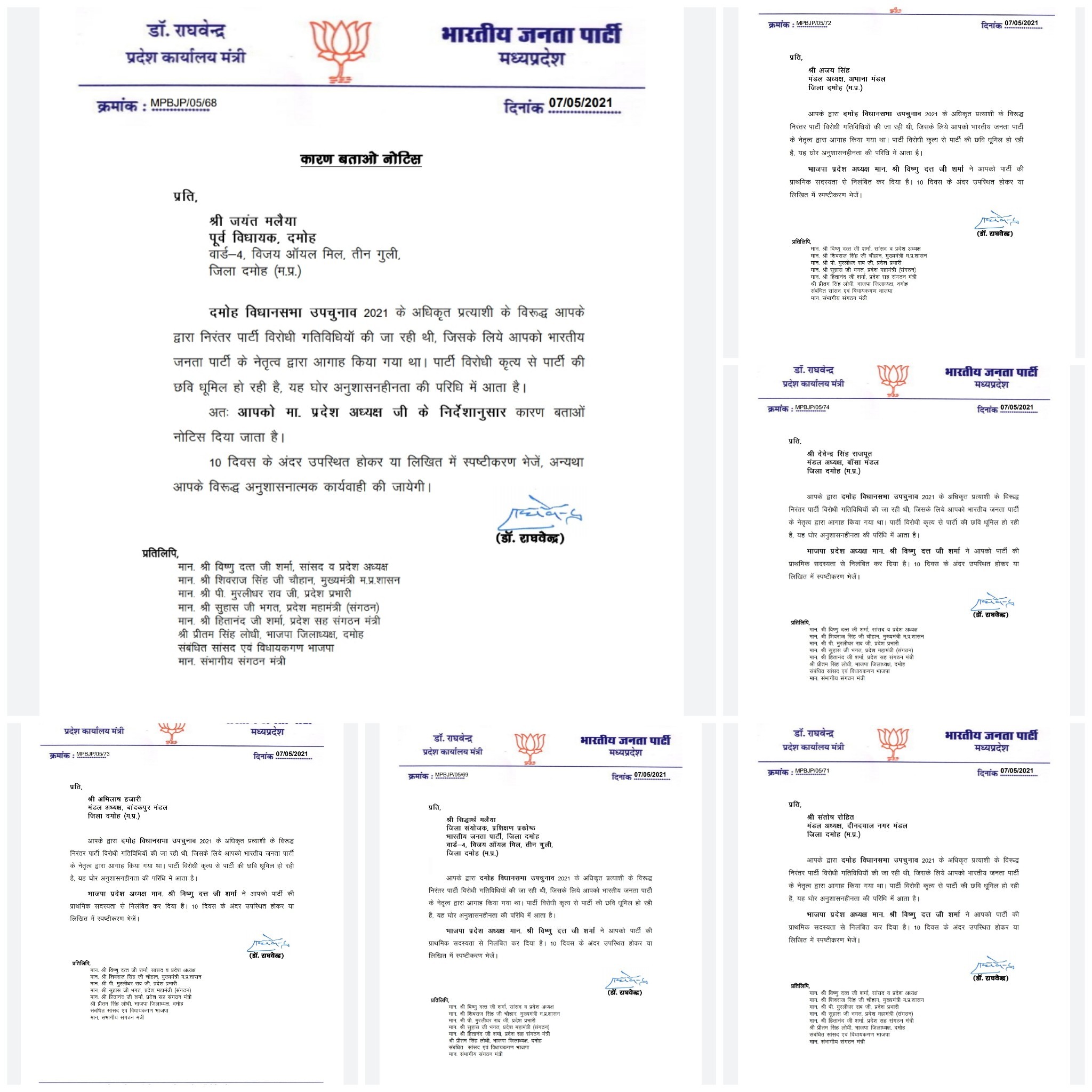 Earlier in the day, the state government shifted Damoh district collector Tarun Rathi and posted him in the secretariat. The Damoh superintendent of police Hemant Chauhan was also shunted out later in the evening.

Reacting to the BJP's action, Congress spokesman Narendra Saluja asked why office bearers of the party were expelled and Malaiya was given show cause notice, and the district collector was also shunted, but the chief minister and Sharma, who always rush to take credit of wins and held complete reins of the (by-poll) campaign, are not being held responsible?