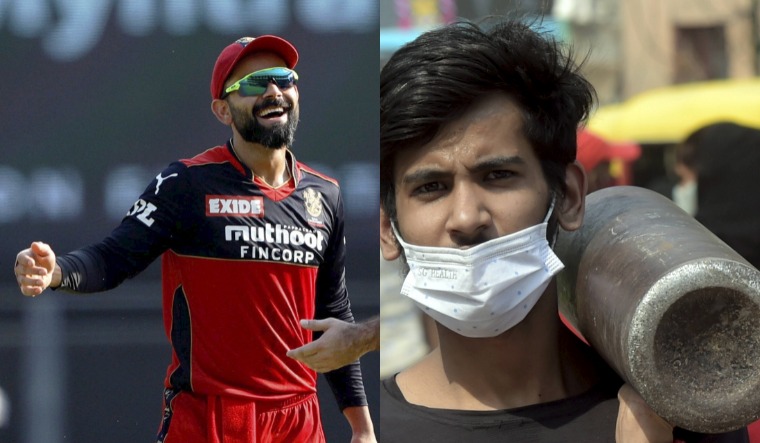 There has been lot of discussion on the attitude of celebrities in the fields like cinema, sports and television to the crises faced by the citizens due to the COVID-19 tsunami, which has hit the country. One part of the debate is on what has been done to help people by these magnetic personalities whose performances on the big and small screens or on the sports field attract lakhs of worshipping fans. The superstars of cricket and Bollywood have big incomes, and also very wealthy business associates. But this time, the debate is equally on what these celebrities have said. And even what they have not said.

Olympic gold medallist Abhinav Bindra has launched a fusillade of shots from his pen, asking whether sportsmen, especially high-earning cricketers, are doing anything to help people suffering in all parts of the country. He has said the stars who are in IPL, the richest cricket league of the world, cannot be deaf and dumb to the hardship faced by people, many of whom are fans. Bindra has also said if he were the president of the Board of Control for Cricket in India, he would have contributed a big sum for purchase of vaccines and other medical necessities to fight the pandemic.

Others have quoted the critical tweet of former Australian cricketer Adam Gilchrist on the collapse of the Indian health system, saying no Indian player will dare to criticise the government. Former cricket captain Sourav Ganguly is the president of the cash-rich BCCI.

Similarly, voices have come up in the film industry on why actors who criticised American pop singer Rihanna, for her support to the farmers' agitation, are silent about apathy to the coronavirus patients. There are questions on why most superstars of Bollywood have not offered their empathy.

Similarly, celebrities who have chosen politics are also under the scanner. Gautam Gambhir, former India opener and BJP MP for East Delhi, has been trolled for continuing with cricket commentary while patients are scrambling for beds and oxygen in his constituency. Gambhir has retorted he is coordinating relief work conducted by his team, even sourcing scarce medicines to be distributed from his constituency office. Celebrity politicians like Gambhir and actors Hema Malini and Sunny Deol are upset they are under microscopic scrutiny compared with 'professional' politicians. Last year, posters put by her opponents in Mathura constituency of Uttar Pradesh had claimed Hema Malini was missing.

The enthusiasts argue that film and sports celebrities have always responded to the human dimensions of the tragedy. Last year, when Prime Minister Narendra Modi launched the PM Cares Fund to fight the epidemic, many celebrities gave contributions, led by Sachin Tendulkar, Akshay Kumar, Varun Dhawan and Virat Kohli and his actress-wife Anushka Sharma, Kartik Aryan and Suresh Raina. Actor Sonu Sood mounted a massive drive to help stranded migrants to reach home from Mumbai and other cities, by hiring aircraft and buses, as well as arranging trains.

Even during the second wave, despite testing positive, Sood is busy helping with oxygen, ventilators for patients and arranging food and transport for migrants. Among IPL stars, Australian fast bowler Pat Cummins has announced a hefty donation for oxygen supply augmentation.

It has been a tradition for celebrities to help the government and society during times of war and calamity. When the Chinese invaded in 1962 or when India went to war to help the brutalised people of Bangladesh in 1971, film stars travelled in convoys in many cities to mobilise donations for the war effort. Several actresses donated their gold ornaments to encourage other women to help the war efforts.

But most celebrities have been wary of making harsh comments against the government, unless they publicly endorse one political party. They prefer to refrain from wading into controversy, for multiple reasons. For sportsmen, the controlling organisations are the source of bread and butter, with both Central and state governments controlling, either directly or indirectly, the central federations and state associations, respectively. Many cricketers recall how even the great Kapil Dev was denied his dues for long by the BCCI, because he had supported opponents of the cricket board.

Similarly, film celebrities point out how governments can harass them in multiple ways. The latest was the Income Tax Department raids on national award-winning actress Taapsee Pannu, who had posted critical tweets against those in power. Even if Abhinav Bindra argues speech is silver, for most celebrities, it is silence, which is golden.

(This article was first published in Malayala Manorama)