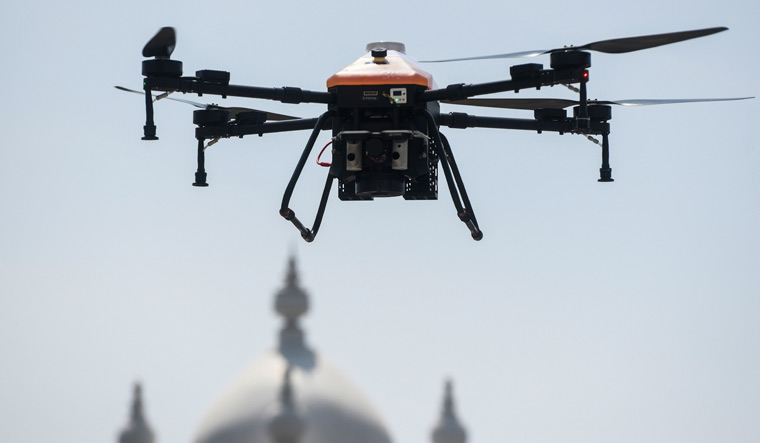 Despite the existence of a ceasefire agreement between India and Pakistan, the BSF on Saturday foiled an intrusion attempt by Pakistani drones at the international border in Jammu.

The BSF released a statement about the incident. It said, “Despite the existence of a ceasefire agreement between Pakistan and India, alert BSF troops in the Arnia Sector foiled a drone intrusion bid by Pakistan on the International Border.”

The statement said during the early-morning hours on Saturday, two drones were observed entering from the Pakistan side and were immediately fired upon by vigilant BSF troops, compelling the drones to retreat back to Pakistani territory.

The BSF said the Pakistan Rangers have been regularly violating the international boundary through drone intrusions to drop arms/ammunition in Indian territory, but the BSF has successfully repulsed the attempts.

It may be recalled that the BSF shot down a Pakistani hexa-copter carrying a huge cache of arms/ammunition on 20 June, 2020, at BOP Pansar.

Saturday’s drone intrusion foiled by BSF Jammu troops is indicative of the alertness and swift retaliatory action by the BSF.

The BSF intelligence branch has been receiving inputs about possible use of drones by Pakistan for ferrying arms and ammunition from Pakistan into the Indian side. Accordingly, the troops were on alert and the border domination was exponentially increased.

The security forces have foiled several such attempts by Pakistan and also arrested some people in connection with receiving the consignment of arms dropped from drones into Jammu and Kashmir.

Dropping of weapons from drones is the new tactic adopted by Pakistan to supply weapons to militants in Jammu and Kashmir.