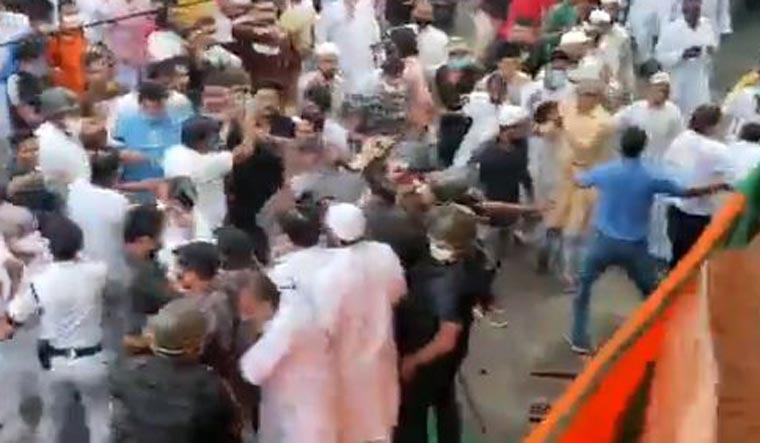 Several people, including BJP candidate for the Kashipur-Belgachia Assembly constituency Sibaji Sinha Roy, were injured after a clash broke out between activists of the saffron party and a group of people in Kolkata on Friday evening, police said.

The clash started when BJP MP Arjun Singh and Sinha Roy reached Belgachia to attend a public meeting and some unidentified people attacked the party workers present there, they said.

Singh's security guards fired in the air to disperse the mob, local residents alleged as the BJP MP held the Trinamool Congress responsible for the attack.

The TMC denied the allegation.

The Election Commission sought a report in connection with the incident, though the police denied any incident of firing by anyone.

Roy was released from a hospital after preliminary medical treatment, police said.

Taking to Twitter, Amit Malviya, the head of the BJP's IT operations and co-in-charge of West Bengal, blamed Chief Minister Mamata Banerjee's 'vote bank' for the incident.

Malviya shared a video clip of men in skull caps engaged in a scuffle; it is yet unclear whether the clip is related to the incident. Malviya tweeted, "In Bengal, democracy under TMC, is under serious threat. Today, BJP’s Kashipur Belgachia candidate Shibaji Singha Roy and MP Arjun Singh, were attacked by members of Mamata Banerjee’s 'vote bank'... Illegal infiltration and demographic invasion is a reality even in Kolkata now." Arjun Singh also shared the video clip.

In February, Sinha Roy and Suvendu Adhikari were injured in an alleged attack by TMC workers at Phoolbagan.