Divert all industrial oxygen for medical purposes: Centre to States

Non-exempted industries that need oxygen can import, make their own: MHA 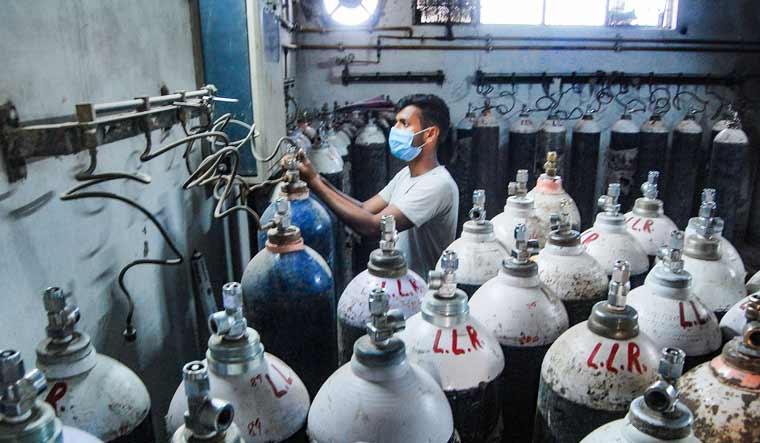 Kanpur: A worker refilling oxygen cylinders at Kanpur LLR Hospital, amid the rise in Covid-19 cases across the Country, in Kanpur, Sunday, April 18, 2021 | PTI

Union home secretary A.K. Bhalla has written to the chief secretaries of states asking them to divert all industrial oxygen for medical purposes given the alarming rise in COVID-19 cases and the growing demand for oxygen supply.

Barring nine exempt industries, the central directive prohibits the supply of oxygen for industrial purposes by manufacturers and suppliers from April 22.

In his letter, Bhalla referred to the rapid rise in COVID-19 cases and resultant rapid demand for medical oxygen, particularly in high burden states like Maharashtra, Kerala, Delhi, Chattisgarh, Karnataka, Tamil Nadu, Gujarat, Uttar Pradesh, UP, Haryana, Punjab and others. He said the Empowered Group, mandated to coordinate medical logistics like oxygen, had recommended prohibiting the supply of oxygen for industrial purposes by manufacturers and suppliers from April 22 , except those coming under nine specified industries that require uninterrupted oxygen, till further orders.

"The recommendation of the Empowered Group has been accepted by the government and the decision, with the list of nine exempted industries, has been conveyed by the union health secretary," said Bhalla. He said that given this order, the MHA urges all states to show compliance and take necessary measures to prohibit the supply of oxygen for industrial purposes as it will help in augmenting the supply of medical oxygen in the country and in saving precious lives.

Meanwhile, the union health ministry has also revised the allotment of oxygen supplies for states where Uttar Pradesh, Maharashtra, Delhi and Rajasthan get additional oxygen quotas. This revision comes within 72 hours even as three new states Uttarakhand, Andhra Pradesh and Telangana have been added for fresh quotas. This follows the supply plan made by the health ministry on April 15 for medical oxygen supply for twelve states with a high number of COVID-19 cases. Some of the states had requested partial modification in this supply and the matter was reviewed by the Empowered Group.

In an earlier letter dated April 16, the Union home ministry had said medical oxygen is an essential public health commodity and its availability of adequate and uninterrupted supply is an important prerequisite for managing moderate and severe cases of COVID-19.

For industrial units barred from obtaining oxygen, the MHA has asked them to consider alternate measures like importing oxygen or setting up their own air separator units for generating oxygen for their captive requirements. Meanwhile, with increasing COVID-19 cases, the MHA has said that medical oxygen supplies will need to keep pace with the requirements of states and the government has allowed free movement of oxygen-carrying vehicles into the cities without restriction.