Such plants provide oxygen 24/7, plan for 59 by end of April 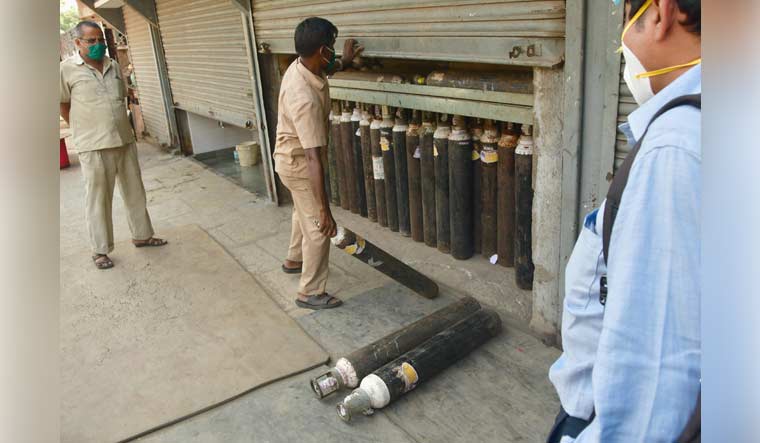 Oxygen cylinders being loaded and refilled at private gas company before being transported to hospitals for Covid-19 patients, amid rise in Covid-19 cases across the country, in Mumbai, Saturday, April 17, 2021 | PTI

Amid growing reports of COVID-19 patients being unable to access oxygen, sometimes dying for want of it, the Health Ministry on Sunday released its data on the number of oxygen generation plants being set up to combat the pandemic in India.

While the government has sanctioned 162 Pressure Swing Adsorption (PSA) oxygen generation plants, only 33 have been built so far. The statement said 59 would be installed by the end of April, and 80 by the end of May.

Out of 162 PSA plants sanctioned by Govt of India, 33 have already been installed - 5 in MP, 4 in Himachal Pradesh, 3 each in Chandigarh, Gujarat & Uttarakhand, 2 each in Bihar, Karnataka & TL; and 1 each in AP, CG, Delhi, Haryana, Kerala, Maharashtra, Puducherry, Punjab & UP.

The ministry’s tweets came after a report by Scroll found that of 60 hospitals across 14 states where plans had been made for new oxygen generation plants, only 11 had been installed, of which just five were operational. The report said the plan for 162 plants had been sanctioned in 2020.

The benefit of on-site oxygen generation is that it allows hospitals to have their own piped supply of oxygen, instead of relying on orders for every batch. As per WHO guidelines, these plants should be able to provide oxygen 24/7, seven days a week.

On January 5, the Prime Ministers Office announced that the PM-CARES fund was allocating Rs 201.58 crore for installing 162 dedicated PSA medical oxygen generation plants in public health facilities. This cost includes Rs 137.33 crore for supply and commissioning and Rs 64.25 crore for a comprehensive annual maintenance contract, with procurement to be done by the Central Medical Supply Store (CMSS), an autonomous body under the Health Ministry. The plan encompassed 162 plants distributed across 32 states, with the most plants in states like Uttar Pradesh (14), Maharashtra (10), and Madhya Pradesh (8).

On April 15, Prime Minister Narendra Modi said that another 100 oxygen plants would be commissioned, using funds from PM-CARES. That day, the Health Ministry said an additional 50,000 MT of oxygen would be imported to fulfil the increased demand.

Private sector firms have stepped up to help: Tata Steel on Sunday tweeted saying it was supplying 200-300 tons of liquid medical oxygen to various state governments.

The Indian Railways have also stepped up to assist, Northern Railways setting up two oxygen cylinders.

India on Sunday recorded its highest-ever single-day rise in the number of new cases, with 261,500 new cases and 1,501 fatalities.