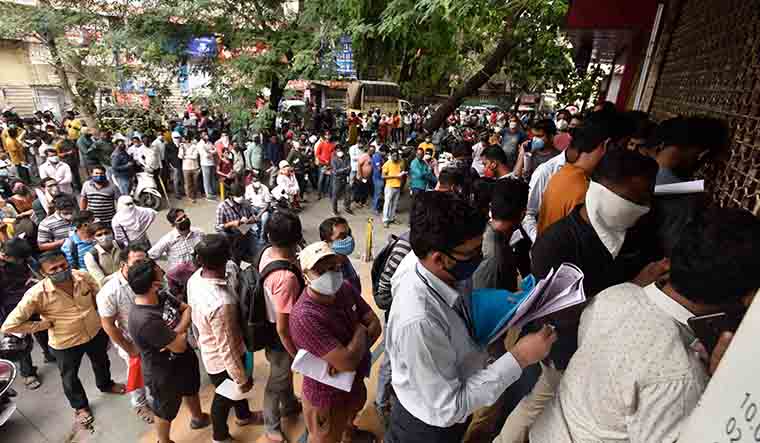 The Uddhav Thackeray government is battling an unprecedented public health emergency, as it nears the end of vaccine doses for its 12 crore-plus citizens at a time when the state is recording an exponential rise in the number of COVID-19 infections and only a part of its citizenry remains vaccinated so far.

Sarita Jadhav, 52, who works as a domestic help in a society in Wadala, had to return without getting her second shot of Covishield vaccine today, because she was told that the centre has run out of stock. The situation in Maharashtra, and not just Mumbai and its satellite cities, is grim and frightening, given that the vaccine sticks are on the verge of running out.

On Thursday afternoon, state Health Minister Rajesh Tope confirmed it, saying the state has only two days of stock of COVID-19 vaccines, after which it will officially run out of vaccine doses for the immunisation drive. "Vaccination has stopped in districts like Satara, Sangli and Panvel. There are many more districts where it has stopped. We have two more days of stock," he said on Thursday. The number of COVID-19 cases in the state have gone well over 30 lakh and its daily fresh infections are crossing 10,000 on an average.

The state health minister, clearly upset with the Centre's previous day allegations that there has been a mismanagement of vaccinations in the state, questioned the "discrimination against Maharashtra", noting that the state is slated to receive 7.43 lakh vaccine doses, as against 40 lakh for UP and MP and close to that for the other states. He also questioned why the Centre was fine with Gujarat getting 1 crore doses in comparison to Maharashtra which got just 1.04 crore doses despite being double its size. Reportedly, there is a big shortage in Mumbai and Navi Mumbai and people are now frantically queuing up outside vaccination centres - limited number of which are open - to get their shots, but most are returning dejected. "Today, we had the registered date on the app for my aunt's vaccination but it still didn't happen. They got late by a few minutes to reach the centre at Mira road and the centre shut at 1pm itself," said Neel Angre, who resides in Sion. Vaccination centres across Mumbai, including Mahim, jumbo centres in Vashi ESIS Hospital and a few others shut down.

"Our pace has increased, centres have increased. I talked to Dr Harshavardhan (Union health minister). I raised the issue of discrimination with us. We have the greatest number of active patients, positivity rate and death, with 12 crore population. Why we are given so few vaccines?" said the state health minister during a press conference on April 8.

Even as people continue to suffer, there was no respite to the political mud-slinging, with former Maharashtra chief minister and BJP leader Devendra Fadnavis taking a swipe at the state government saying that vaccine shortage is based on performance and not population. Reacting to the state health minister's comparison to BJP-ruled states of Gujarat and UP getting more doses than Maharashtra and urging the Centre for increasing the vaccine doses, Fadnavis said that the state is spreading false news about the shortage which is actually not as acute. "The state received 1.06 crore vaccines on April 6 and utilised 91 lakh. This means that it still has 1.5 million left. So, why shut down the centres?" he tweeted.

The controversy created a furore on Twitter, with many in the government taking a stance. "The Centre has repeatedly targeted Maharashtra government in the midst of a crisis to score political points," tweeted Dr Shama Mohamed. Member of Parliament Priyanka Chaturvedi said, " Maharashtra knows how this pandemic is all about politics for BJP. There is desperation and then there is Devendra Fadnavis." As per the latest data, Maharashtra got 7.5 lakh doses while UP got 48 lakh, MP got 40 lakh, Gujarat got 30 lakh doses, and Haryana received 24 lakh doses.